Will New Engines Take China's J-20 Fighter To the Next Level? 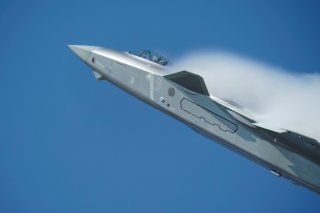 Experts quoted in the Chinese Communist Party’s Global Times newspaper claim that the new engines will do exactly that. The paper asserts that the new WS-10 engines improve the operational performance of the jet in extreme environments such as high altitudes, cold weather, and humid climates.

A Chinese aviation engineer quoted in the paper said that the “domestic engines unleashed the potential of the J-20, since the old engines were not customized for the aircraft, and it had to make compromises in its performance.”

The improvements to the J-20 also included redesigns of the airframe, structure, pipelines, electric circuits, and subsystems, the report said.

“The switch to domestically made WS-10 engines from imported ones has made mass production possible … other systems on the J-20, including the avionics system, radar system and weapons systems, were already domestically developed,” a report in the Global Times from last year states.

The pace of a J-20 production ramp-up could be impressive due to China’s mass production capabilities. Even if the J-20 can’t fully rival the F-35, the number of 5th-generation aircraft in China’s fleet is of great significance. With more J-20s, China can pose a greater threat to the United States and its allies. This fact is quite likely on the Pentagon’s radar. However, multiple news reports say that China does not—at least at the moment—operate a large number of J-20s.

While the scope and pace of a J-20 production ramp-up may not be clear, China appears to have both the intent and the industrial capacity to significantly increase the number of J-20s it produces. Given that Sun Tzu’s “mass matters” principle is still quite relevant in modern warfare, China will need many more J-20s to truly compete for air superiority.

However, if the J-20 is unable to compete with the F-35 in the realms of sensor range, targeting precision, and multi-role air dominance, merely having a large fleet of J-20s may not be enough.

For example, should long-range, high-fidelity F-35 sensors identify J-20s first, a single F-35 could be positioned to destroy an entire formation of J-20s.