Will Turkey Really Get an Aircraft Carrier Armed with F-35s? 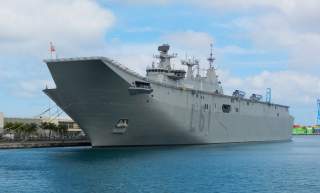 Turkey has decided to join the aircraft carrier club.

Within two years, the Turkish Navy will accept the delivery of TCG Anadolu, the largest and most formidable warship to join the fleet in over one hundred years. But the future of the Anadolu depends to great extent on the strength of the relations between Ankara and Washington, and the future of that relationship has come intro grave doubt.

Anadolu is the fourth ship built to the Juan Carlos design. Juan Carlos I entered Spanish service in 2010. HMAS Canberra and HMAS Adelaide joined the Royal Australian Navy in 2014 and 2015 respectively. The Spanish shipbuilding firm Navantia won the construction contract through a joint bid with the Turkish firm Sedef Shipbuilding Inc. Navantia supplied the core of the design, as well as construction expertise while Sedef facilitated the building of the ship in Turkey. Sedef also arranged acquisition of mostly Turkish combat and support systems. Laid down in 2018, Anadolu should be ready for trials by 2021.

Anadolu will displace twenty-seven-thousand tons at full load, with a length of 761 feet and a speed of 21 knots. The Turkish navy debated going with an all-amphibious design before deciding on a platform that could operate the F-35B Joint Strike Fighter. Juan Carlos currently operates the AV-8B Harrier II, a nearly forty-year-old aircraft with significant performance restrictions. If Spain goes ahead with a decision to acquire the F-35B, Juan Carlos will offer a modern, if limited, multirole naval-air capability. The two Australian variants are both optimized for amphibious operations, although debate in Australia continues over whether to modify the ships to carry the F-35B.

Anadolu is reportedly expected to operate in two different configurations, light carrier and amphibious assault. In the latter, she will carry a complement of helicopters and a variety of amphibious equipment. In the former, reports differ on how many F-35Bs Anadolu could carry, with a high of twelve. But whether Turkey will get the F-35Bs remains in some question.

Turkey is unlikely to have any interest in acquiring old Harriers, so Anadolu’s carrier role is entirely dependent on the acquisition of the F-35B. Turkey is a tier-three partner in the F-35 project, and has long expected to acquire the F-35A. The Navy’s interest in the B model stems mainly from its desire to operate Anadolu as a light carrier.

The problem with Turkey’s F-35 participation lies in the increasingly tense relations between Ankara and the United States. In addition to political difficulties stemming from the 2016 coup attempt against President Recep Erdogan and differences in view over political outcomes in Syria, Turkey has expressed strong interest in the acquisition of the Russian S-400 air-defense system, an acquisition that would run foul of US sanctions against Russia.

The United States can waive retribution for such sanctions (it will probably do so for India), but the tolerance for that kind of waiver depends to great extent on the quality of the relationship with the United States. For the aforementioned reasons, the United States is not, as of the moment, certain that it wishes to substantially increase Turkey’s expeditionary capabilities. Indeed, Lockheed Martin and the US Air Force are making conciliatory noises about the exclusion of Turkey from the F-35 project, suggesting that it will not substantially impact the cost curve.

Anadolu will be the largest Turkish warship since TCG Yavuz, a former German battlecruiser transferred in dramatic fashion in 1914. Anadolu will offer the Turkish Navy unprecedented amphibious assault capability in the Black Sea and the Eastern Mediterranean. While relations between Russia and Turkey have seen substantial recent improvements, Anadolu would represent a major NATO asset in the Black Sea, whether or not she carries F-35s. If Turkey goes the other direction, and tensions with NATO (and in particular Athens) increase, then Anadolu could present a formidable problem for Greek military planning. In any case, Anadolu offers a focus for Turkey’s dedicated humanitarian assistance/disaster relief capabilities across the region.

Turkey’s means of supporting Anadolu in a combat capacity are limited; the primary escort ships in Turkish service are three-thousand-ton frigates that lack the Aegis air-defense system. Unless Turkey acquires larger air defense warships, Anadolu would best be served by cooperative task forces with other NATO navies. When operating close to home, Anadolu would also have the advantage of support from land-based air.

Much depends on the F-35 decision. For a modern VSTOL fighter, the F-35B is essentially the only game in town. Russian and Chinese sources have floated rumors about a new VSTOL fighter, or perhaps a revival of the Yak-141 supersonic VSTOL fighter of the late 1980s. But such plans, even if they exist, remain in infancy. In order to maximize the capability of its new carrier, Turkey needs to make nice with the United States.

Whether or not Turkey finally gets its hands on the F-35B, Anadolu will become one of the most important ships the Turkish navy has ever operated. The missions she eventually undertakes will depend very much on political decisions in Ankara; how close to remain to the United States, how to manage tensions with Greece, and how to handle Russia. But Anadolu is a useful enough platform that she can make an important contribution to any of these problems.

The views expressed here are his personal views and do not necessarily reflect those of the Department of Defense, the U.S. Army, the Army War College, or any other department or agency of the U.S. government.