Would Putin Fight a ‘Limited’ Nuclear War in Ukraine? 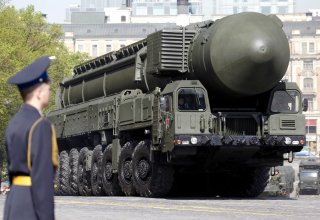 Faced with the prospect of losing the war in Ukraine, would Russian president Vladimir Putin resort to using nuclear weapons? Putin certainly has options if he chooses to do so, and his prior threats to resort to nuclear use are not reassuring.

This naturally raises the question as to whether some kind of “limited” nuclear war might be possible—a frightening notion that most nuclear weapons analysts routinely reject. Indeed, it seems difficult to envision any scenario where there could be a winner in a limited nuclear war without escalation. U.S. secretary of defense Lloyd Austin recently articulated this point when he was asked about the Russian nuclear threat while traveling in Germany. “Nobody wants to see a nuclear war happen. It’s a war that, you know, where all sides lose,” Austin said.

The United States did commit to building low-yield, tactical nuclear weapons following the Trump administration’s 2018 Nuclear Posture Review (NPR). The 2018 NPR called for a new low-yield variant of the existing Trident II D5 nuclear missile, which has already been built. The same NPR also called for the manufacture of a low-yield, submarine-launched nuclear-armed cruise missile as well as other low-yield options. The strategic thinking behind this initiative, as former Defense Secretary James Mattis explained to Congress years ago, was to bring Russia back to the “negotiating” table after violating the Intermediate-Range Nuclear Forces Treaty and improve deterrence by giving U.S. commanders more options.

These questions have now returned to the forefront of U.S. national security discussion, creating difficult challenges for the Biden administration, which is involved in helping Ukraine fend off Russia’s invasion.

Would the knowledge that the United States could respond with its own tactical nuclear weapons deter Russia from using its own? Or would the threat of U.S. “limited” nuclear strikes further embolden Putin to act before the United States starts the war on its own terms? How much risk would Putin and the Russian leadership be willing to absorb? The answers to these questions have no clear answer, and the ambiguity that decisionmakers in both Russia and the United States must live with makes escalation management very difficult. Fortunately, for now, both countries remain interested in avoiding direct conflict or nuclear war, but whether this tenuous arrangement can last is another question entirely.