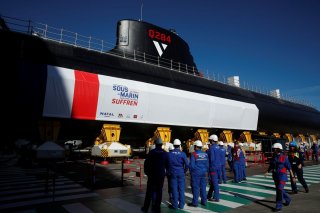 As France’s first-in-class nuclear-power attack submarine (SSN) Suffren (Qs84) continues to conduct sea trials near its base at Cherbourg, it is drawing the attention of the Russian Navy’s RFS Akademik Pashin. Officially, that Russian ship a Project 23130 replenishment tanker, but it is also believed to be a spy ship.

The Marine Nationale’s Suffren, named for the 19th century Admiral Pierre André de Suffren, recently completed its static dive test as the first part of its sea trials. It will now head to Brest, a port city located in the Finistère département in Brittany, to complete its deep-diving tests. The Suffren is the first of six planned boats and two are now under construction.

The Russian presence was noted by Open Source analysts, while the suspected spy ship was monitored by both French and British warships. The Akademik Pashin is among the newest vessels in the Russian Navy, and was only commissioned on January 21 of this year, Naval News reported. As a replenishment oiler, the ship can carry fuel oil, diesel, aviation kerosene, lubricating oil, water, food and spare parts. The ship is 5,000 tons empty and 12,000 tons fully laden.

Akademik Pashin’s role as an intelligence gathering vessel has not been confirmed, but as H. I. Sutton of Naval News and Forbes noted, “All naval vessels have a potential to gather intelligence if they are in the right place at the right time.” Given how close the Russian ship was to the Suffren would be such an example of right place at the right time, but it would seem to be quite a coincidence as it arrived off the coast of France around April 16, where it took up position in the Bay of Seine just outside French waters.

What makes it more curious is that the Suffren departed Cherbourg on April 27, a day after the Russian ship had got underway from its location. The sea trials for the Suffren were originally scheduled for March and had been delayed due to the outbreak of the novel coronavirus. But were the presence of Russian ships a factor?

The French Marine Nationale and British Royal Navy have been “shadowing“ the movement of Russian warships that have “lingered” in the region. The Royal Navy’s HMS Mersey, a River-class offshore patrol vessel (OPV), tracked the Russian warship RFS Boiky, which had linked up with the Akademik Pashin to refuel and transfer stores—confirming at least that the latter ship still operates in its primary role as a replenishment tanker.

Western navies have paid close attention to the movements of these vessels—in March the Akademik Pashin had rendezvoused off the coast of France with the GUGI “research ship” Yantar, another suspected spy ship. Last November that vessel was suspected of loitering near Submarine Communications Cables (SCC), which crisscross the world’s oceans and carry Internet traffic and military communications. It is believed the ship has placed listening devices on undersea communications, which is why the unarmed vessel has gained so much notoriety.

Perhaps the Akademik Pashin and similar tankers will also be more closely watched—especially if any continue to find themselves in just the right place at that right time.