Yes, the U.S. Military Already Has Laser Weapons (Can We Add Them to F-35s?) 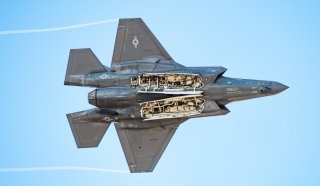 Power scaling, increased precision, space operations, tailorable attacks, missile defense and an ability to pinpoint and incinerate targets are all factors characterizing the development and operational deployment of laser weapons.

While laser weapons are already here, the Pentagon and industry are taking new accelerated steps to prepare them for a much wider sphere of applications. For example, they want to fire them from fighter jets, burning up and disabling attacking anti-ship missiles. They even would like to put lasers in space.

Some of the next steps include “scaling” the power of laser weapons to increase range, strength, durability and transportability. These are now being worked on by the Air Force Research Laboratory, Missile Defense Agency (MDA) and Office of Naval Research.

Lasers are now on U.S. Navy destroyers and can fire from Stryker vehicles at attack drones, yet a new sphere of laser functionality is on the horizon and approaching quickly. Lasers also already arm Navy amphibious assault ships and will, likely in just the next few years, arm F-22s and F-35s.

Firing from fifth-generation aircraft includes building upon successful ground tests to ultimately arm aircraft with transportable laser weapons able to fire from the sky. This would likely involve combining numerous laser beams into a single application to optimize missile defense and even, in the future, cultivating laser weapons able to travel beyond the earth’s atmosphere and perhaps fire from satellites.

The advantages of lasers are clear and well known; they fire at the speed of light. Their combat impact is tailorable depending upon desired combat effect, meaning they can be scaled to either disable or completely destroy targets. They are also silent, lightweight and inexpensive.

Yet, at the same time, there are areas of technical challenge when it comes to taking some of these news steps. Ship, fighter jet or armored vehicle laser weapons require large amounts of mobile, exportable electrical power. They cannot function without the requisite amount of power, creating form-factor, size, heat and transportability challenges.

Essentially, engineering a laser weapon that is both powerful enough and also small enough to travel on a high-speed fighter jet, is difficult. This phenomenon is also informing current MDA work which, officials say, is primarily focused upon engineering sufficient “power scaling” of lasers to enable missile defense applications.

Lasers also need to be hardened against beam attenuation, meaning a weakening of the weapon's power caused by adverse weather conditions, insufficient power or an inability to sustain effectiveness at certain ranges.

Thermal management is also fundamental, as laser weapon temperature needs to be properly managed, creating a need for technical flexibility when it comes to certain engineering specifics.

“The higher the diode temperature, the less efficient the laser is. However, the thermal management system works most efficiently with higher diode temperatures. So deciding an arbitrary temperature in the MOSA standard would be very risky and result in a suboptimal system,” Dr. Sean Ross, the Deputy High Energy Laser Technical Area Lead and Prototyping Liaison for the Air Force Research Laboratory said in a Pentagon report.

Ross further elaborated upon this by explaining that, when it comes to thermal management, the “higher the voltage used in the laser, the lower the required weight of the copper conductive wires.”