When the Lasers Strike: How the U.S. Military Wants to Protect Its Planes and Bases 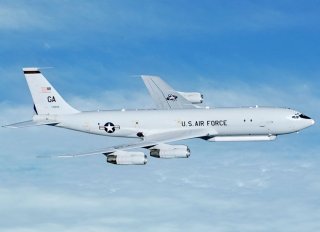 The U.S. Air Force is looking at innovative ways to counter a new generation of enemy weapons such as lasers, anti-satellite systems, long-range missiles and advanced air defenses. One way the Pentagon hopes to deal with these weapons is by sharpening its focus on emerging methods of networking, sensor detection and countermeasures.

“We are trying to find and destroy mobile, agile, intelligent hard to find targets such as mobile anti satellite systems, mobile directed energy systems, mobile long range fires and mobile integrated air defenses [that] in many cases they are shooting at ports and airfields which are easy to find,” Holmes told Retired Lieutenant General David Deptula, Dean of the Mitchell Institute for Aerospace Studies in a special interview series.

Holmes explained the dynamic in terms of a “battle of long range fires” requiring Air Force war commanders to help “close that kill chain.” He cited ABMS as the key conceptual and technical foundation upon which this kind of combat effectiveness can be achieved.

ABMS is a future-oriented program immersed in leveraging, networking, innovating and uncovering a meshed web of warzone surveillance “nodes” able to find enemy targets with great accuracy at long ranges. Of greatest significance, the program is understood in terms of mission objectives, meaning that it may ultimately evolve into a series of specific platforms capable of performing the operations. The program initially emerged out of a need to replace the Air Force’s highly effective, yet aging E-8 Joint Surveillance Target Attack Radar System (JSTARS) surveillance planes. What is needed now is a new platform or series of nodes able to operate at greater distances and operate in austere, high-risk environments.

The JSTARS planes were highly effective at reconnaissance and intelligence-gathering in areas such as Afghanistan, where the U.S. operates in what’s called “uncontested airspace.” However, they would, of course, face challenges when confronting advanced air and ground weapons developed by sophisticated adversaries.

As a large “unstealthy” surveillance aircraft, a JSTARS would be vulnerable in contested airspace to advanced air defenses, lasers, ground-fired missiles and air-to-air attacks. The mission scope and effectiveness of the JTARS does, however, need to be replicated, yet adjusted to a much higher-threat, contested environment.

This may mean the development and use of stealthy, forward-operating networked drones able to sense key targets and transmit signals to a flying “mothership” flying at safer standoff distances.

The JSTARS mission is, after all, nuanced and quite complex. Synthetic Aperture Radar, which paints an image or rendering of the terrain below, is able to connect with on-board computers, electro-optical sensors and additional detection technologies such as Ground Moving Target Indicator to find enemy ground vehicles.

The JSTARS can cover wide swaths of terrain, identify areas of relevance, perform on-board analytics in many respects, and pass vital information along to drones able to offer more of a pinpointed view at target areas.

It makes sense to place all of this in the context of Holmes’ reference to a “kill chain.” After all, what use is a surveillance network if it does not speed up, improve and expedite the process of “destroying” an enemy’s advanced weapons threat.

This means countermeasures, electronic warfare (EW), interceptor missiles and straight forward offensive attacks upon enemy weapons systems once discovered, may be employed. Perhaps a cutting-edge EW system can block, jam or re-direct incoming enemy laser fire or guided ballistic missiles? Perhaps a network of manned-unmanned platforms can detect the launch of an anti-satellite system or find the electronic signature of an enemy air defense system and pinpoint the necessary targets for attack in a matter of seconds.

Such a technical ability would indeed be necessary to accomplish the kinds of missions articulated by Holmes, such as defending findable, and potentially vulnerable, targets such as “ports and airfields.”

Air Force war planners in the Pacific have a particular interest in questions pertaining to the importance of targeting and surveillance networks, given the dispersed geographical expanse of the region. This interest also often explains the importance of long-range attack and “standoff” forces.

“The Standoff force (in the Pacific) will have to rely upon intelligence, surveillance and reconnaissance assets. They attack targets they do not see,” Brigadier General Mike Winkler, Pacific Air Force Director, Strategic Plans, Requirements and Programs, told Deptula in a separate, but related discussion.

Holmes explained these efforts within a specific major-power threat context, explaining that much of the innovation in the U.S. Air Force is zeroed in on finding new ways to destroy, respond to or thwart enemy attempts to “counter” successful U.S. weapons.

“We have watched China and Russia spend the time since Desert Storm watching what we do coming up with ways to counter our strengths and take advantage of our weaknesses,” Holmes told Deptula.