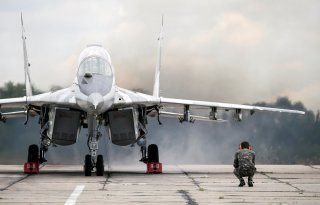 Ukrainian president Volodymyr Zelensky announced on Sunday that his government was willing to consider abandoning its attempts to join NATO and enshrining neutrality in the country’s constitution as part of a peace deal with Russia.

“Security guarantees and neutrality, non-nuclear status of our state. We are ready to go for it,” Zelensky said, also referencing a Russian talking point that Ukraine could be used by the West to host nuclear missiles only minutes of flight time away from major Russian cities.

“This is the most important point,” the president told the reporters. In his daily address to the Ukrainian public, he added that Ukraine had sought peace with Russia “without delay,” indicating its willingness to commit to neutrality between Russia and the West.

Zelensky added, however, that such a step would need to be approved by Ukrainian voters in a nationwide referendum—a vote that could not possibly be organized with an active war and Russian troops present on Ukrainian territory, effectively meaning that a Russian withdrawal would need to take place first.

The Ukrainian leader’s comments come as Russian and Ukrainian negotiators are scheduled to resume peace discussions in Istanbul, Turkey. Earlier talks in neighboring Belarus failed to reach a settlement.

Roskomnadzor, Russia’s state communications regulator, forbade Russian news outlets from publishing Zelensky’s interview within the country, noting that several of the journalists were affiliated with Russian-designated “foreign agent” organizations, including the independent Meduza newspaper, which has been banned within Russia. The interview has been hosted on YouTube outside of Russia.

After its independence from the Soviet Union in 1991, Ukraine has maintained a contentious balance with both Russia and the West, and successive Ukrainian leaders sought closer relationships with one side or the other. However, the country’s politics underwent a seismic shift in 2014 after pro-Russian leader Viktor Yanukovych was ousted from power after weeks of popular protests. In the aftermath of Yanukovych’s ouster, Russia invaded and annexed the Crimean Peninsula and assisted pro-Russian separatist forces in the eastern provinces of Donetsk and Luhansk.

In the run-up to the Russian invasion of Ukraine, Russian leader Vladimir Putin also repeatedly downplayed Ukraine’s independent history from Russia, arguing that the country had been created as a subdivision of Russia by the Bolsheviks following the Russian Revolution and that Russians and Ukrainians should remain part of the same nation.