‘Discriminatory and Stigmatizing’: WHO Will Rename Monkeypox Virus 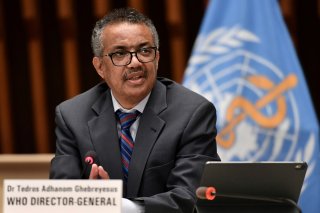 The World Health Organization (WHO) confirmed on Tuesday that it will officially rename the monkeypox virus due to concerns about stigma and racism surrounding the fast-spreading disease.

“WHO is … working with partners and experts from around the world on changing the name of monkeypox virus, its clades, and the disease it causes,” WHO Director-General Tedros Adhanom Ghebreyesus said during a press briefing. “We will make an announcement about the new names as soon as possible,” he continued. Per Fox News, Tedros’ remarks came after more than thirty international scientists said last week that the monkeypox label can be discriminatory and stigmatizing, adding that there is an “urgent” need to rename it.

“The prevailing perception in the international media and scientific literature is that MPXV is endemic in people in some African countries. However, it is well established that nearly all MPXV outbreaks in Africa … have been the result of spillover from animals to humans and only rarely have there been reports of sustained human-to-human transmissions,” the group of scientists wrote. “In the context of the current global outbreak, continued reference to, and nomenclature of this virus being African is not only inaccurate but is also discriminatory and stigmatizing,” they continued.

The proposal echoes a similar controversy that took place when the WHO moved quickly to rename SARS-CoV-2 after many people worldwide referred to the disease as the China or Wuhan virus.

Meanwhile, ABC News reports that the WHO is planning to assess whether the current monkeypox outbreak is a public health emergency. According to the Centers for Disease Control and Prevention (CDC), there have been more than 1,700 confirmed and suspected cases of monkeypox reported in four dozen countries where the virus is non-endemic. In the United States, seventeen states and the District of Columbia have reported sixty-five total cases. To date, the WHO has not been informed of any deaths among cases.

“The global outbreak of monkeypox is clearly unusual and concerning. I think it's now clear that there is an unusual situation meaning even the virus is behaving unusually from how it used to behave in the past,” Tedros told reporters. “But not only that, but it's also affecting more and more countries and we believe that it needs also some coordinated response because of the geographic spread,” he continued.

The recent surge in monkeypox cases is believed to be highly unusual because they are occurring in North American and European countries where the virus is not endemic. Monkeypox is generally found in Central and West African rainforests where animals that carry the virus live. The first case of monkeypox among humans was recorded in the Democratic Republic of the Congo in 1970.