America is Running Out of ICU Beds Again 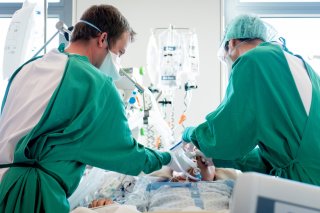 Following a surge in coronavirus cases throughout the United States, hospitals in all fifty states have seen increased admissions, and many have experienced acute staffing shortages. Among the states with the lowest vaccination rates, these outcomes have been the worst. Five states in particular–Texas, Arkansas, Alabama, Georgia, and Florida–are each nearly out of intensive care unit (ICU) beds.

According to the Department of Health and Human Services, each of the five states has less than ten percent of statewide ICU bed capacity remaining. The rest are filled, both with COVID-19 cases and other illnesses.

COVID-19 cases have been highest in the South, where vaccination rates are typically the lowest. As of the end of August, Mississippi has the lowest vaccination rate in the United States, with 37.7 percent of its population having received both doses of the vaccine. In Mississippi, nine ICU beds are available in the state, according to Jim Craig, Senior Deputy and Director of the Mississippi Department of Health.

Alabama, the next lowest state, has a marginally higher vaccination rate, at 38.3 percent. On August 18, the state officially ran out of ICU beds.

While the South has experienced the worst rates of COVID-19 hospitalization, other states with low vaccination rates have also experienced critical shortages of ICU units. In Idaho, which has a vaccination rate of 39.2 percent, Governor Brad Little reported that four of the state’s 400 ICU beds remained open as of Tuesday.

Little, a Republican, highlighted the fact that the overwhelming majority of Idaho’s COVID-19 hospitalizations were among unvaccinated Americans. He also stated that the average age of Idahoans hospitalized with COVID-19 was 43, meaning that many younger Americans have been affected in addition to seniors, who are regarded as more vulnerable to the virus.

One particularly concerning sign of the surge in cases has been in children, who are typically far less affected by the virus than adults are but can serve as vehicles for infection for their families. Over the past week, more than 200,000 have tested positive for the virus, according to the American Academy of Pediatrics. Uncertainty about safety as schools reopen has led many to resume virtual learning.