Anthony Fauci on Coronavirus: “I don’t really see us eradicating it.” 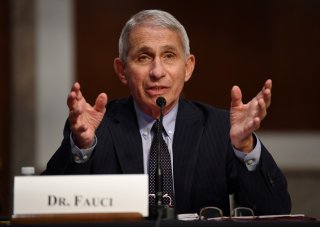 White House coronavirus advisor Dr. Anthony Fauci said on Wednesday that it is highly unlikely that the novel coronavirus will ever be eradicated.

It is, however, possible for world leaders and public health officials to work together to bring the virus down to “low levels.”

“I think with a combination of good public health measures, a degree of global herd immunity and a good vaccine, which I do hope and feel cautiously optimistic that we will get, I think when we put all three of those together, we will get control of this—whether it’s this year or next year. I’m not certain,” Fauci, the director of the National Institute of Allergy and Infectious Diseases, said during a webinar with the TB Alliance.

He later added: “I don’t really see us eradicating it.”

Fauci’s comments seemingly contradict President Donald Trump’s long-held assertion, which he reiterated on Tuesday during a White House briefing on the pandemic, that the contagion will eventually disappear.

According to the latest data from Johns Hopkins University, COVID-19 has infected more than 3.9 million people in the U.S. and has been responsible for at least 142,000 deaths. More than half of all states are witnessing a surge in new cases.

Fauci noted that government officials must do a better job in containing the virus, which can be partly accomplished by adopting mask mandates and closing restaurants and bars.

“We are certainly not at the end of the game,” Fauci said. “Certainly, we are not winning the game right now—we are not beating it.”

Just last week, Fauci suggested that the nationwide surge in coronavirus cases is due to the U.S. not shutting down completely during its initial response to the virus.

Fauci highlighted the fact that COVID-19 is extremely efficient in transmitting from human to human and can produce a wide range of symptoms in those who are infected.

“Others get hospitalized, require oxygen, intensive care, ventilation and death. The involvement with the same pathogen is very unique.”

There are now more than 14.7 million confirmed cases of coronavirus worldwide, including at least 612,000 deaths, according to the latest data from the WHO.