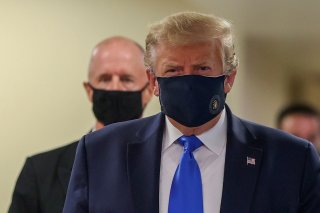 After months of resisting to wear a face mask in public and questioning its effectiveness, President Donald Trump tweeted that it is now a “patriotic” action to take during this ongoing COVID-19 pandemic.

“Many people say that it is Patriotic to wear a face mask when you can’t socially distance,” Trump posted. “There is nobody more Patriotic than me, your favorite President!”

Trump’s tweet, however, seemed to contradict what he said in a Fox News interview over the weekend.

“I don’t agree with the statement that if everybody wear a mask everything disappears,” he said in response to remarks made by CDC Director Robert Redfield, who claimed that if all Americans wore face masks and coverings, the virus could be under control in a matter of weeks.

“All of sudden everybody’s got to wear a mask, and as you know masks cause problems, too,” Trump continued.

But he later added: “With that being said, I’m a believer in masks. I think masks are good.”

Trump also announced that he would resume daily coronavirus briefings at the White House.

In recent weeks, as multiple states have witnessed a record-breaking surge in new COVID-19 cases, masks have become more embraced by government officials and business owners.

More than half of all U.S. states have instituted statewide mandates requiring people to wear masks or coverings.

Medical experts have noted that the virus can spread through respiratory droplets that pass when an infected person coughs or sneezes. Recent studies have suggested that not wearing a face mask dramatically increases a person’s chance of being infected by the coronavirus. Other experts have asserted that the coronavirus could spread through aerosolized droplets, particularly in poorly ventilated spaces.

The CDC released a new study that said state leaders should strongly consider requiring face masks and coverings to curb the spread of the virus. This particular study focused on two Missouri hair stylists who were infected with the coronavirus but didn’t pass it on to their customers.

“With the potential for pre-symptomatic and asymptomatic transmission, widespread adoption of policies requiring face coverings in public settings should be considered to reduce the impact and magnitude of additional waves of COVID-19,” the study said.

There are now more than 14.5 million confirmed cases of coronavirus worldwide, including at least 607,000 deaths, according to the latest data from the WHO.