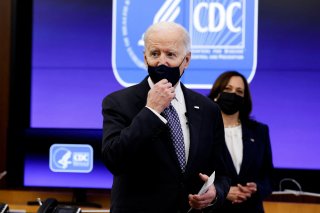 Top officials within the Biden administration are becoming increasingly worried about a potential polio outbreak, according to a new Politico report.

Citing information from two senior administration officials, the news outlet noted that high-level officials from the White House, Centers for Disease Control and Prevention (CDC), and the Department of Health and Human Services (HHS) have met several times at the National Security Council in recent weeks to determine how to boost vaccination rates and improve surveillance across the country.

“It could put the public at risk,” a person familiar with the conversations said, adding that any White House response to the disease could be thwarted if it is unable to reliably track the movement of the virus, which already has been detected in wastewater systems in New York state.

Late last week, New York Gov. Kathy Hochul declared a state of emergency over polio in hopes of increasing vaccination rates in the state. The order will allow emergency medical services workers, midwives, and pharmacists to administer the polio vaccine and will permit doctors and nurse practitioners to issue standing orders for the immunizations.

Health officials said that all unvaccinated New York residents—including children two months of age, pregnant people, and those who haven’t completed their vaccine series—should get their shots immediately. They added that it is possible that hundreds of people in the state have contracted polio but are unaware that they are infected. Most people with the disease have no symptoms but can still transmit the virus to others for days or weeks.

“On polio, we simply cannot roll the dice. If you or your child are unvaccinated or not up to date with vaccinations, the risk of paralytic disease is real. I urge New Yorkers to not accept any risk at all,” New York State Health Commissioner Dr. Mary Bassett said in a release.

“Polio immunization is safe and effective—protecting nearly all people against disease who receive the recommended doses. Do not wait to vaccinate,” she continued.

Meanwhile, as reported by Axios, the World Health Organization added the United States to a list of about thirty other countries where circulating vaccine-derived polioviruses have been identified.

“We cannot emphasize enough that polio is a dangerous disease for which there is no cure,” José Romero, CDC director at the National Center for Immunization and Respiratory Diseases, said in a release.

Once a common virus, polio is primarily transmitted through contaminated water and food or contact with an infected person. In some young children, the disease can affect the nerves and cause muscle weakness or paralysis, which can sometimes be fatal. There is no cure, but it is easily preventable by the polio vaccine, which became available in 1955. According to CDC data, about 92 percent of children are vaccinated against polio in the United States.