Bill Gates: Worst of Coronavirus Pandemic Might Still Be Ahead 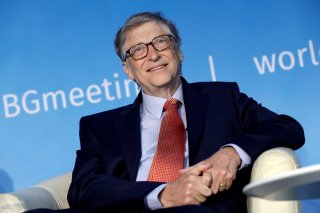 Billionaire philanthropist Bill Gates is concerned that the world has yet to see the worst of the COVID-19 pandemic.

“We’re still at risk of this pandemic generating a variant that would be even more transmissive and even more fatal,” the Microsoft co-founder, who had been warning about the threat of a global pandemic since 2015, told the Financial Times on Sunday. “It’s not likely, I don’t want to be a voice of doom and gloom, but it’s way above a 5 percent risk that this pandemic, we haven’t even seen the worst of it,” Gates continued.

Gates noted that one way to prepare for the next pandemic is for the World Health Organization (WHO) to launch a global surveillance team featuring experts who can quickly spot new health threats across the world. He has labeled the proposed task force the “Global Epidemic Response and Mobilization” (GERM) initiative. Gates also told the Financial Times that it would cost around $1 billion a year to run such a global response team, cautioning that the currently set WHO funding was “not at all serious about pandemics.” Gates further said that, “it seems wild to me that we could fail to look at this tragedy and not, on behalf of the citizens of the world, make these investments.”

According to the International Monetary Fund (IMF), in addition to the more than 6.2 million lives lost worldwide due to the virus, the pandemic will cost the global economy more than $12.5 trillion by 2024.

As reported by CNBC, new coronavirus cases in the United States are largely being driven by the highly transmissible BA.2 subvariant of the Omicron strain. The seven-day average of daily new cases is up to more than 54,000 as of Sunday, according to the latest data compiled by Johns Hopkins University. That figure is a 9 percent rise compared to last week.

“It’s probably going to be centered in the Northeast, maybe Florida. I think by the time it starts to spread nationally, we’ll already be deep into the summer, and that’ll provide a seasonal backstop,” said Gottlieb, a physician who worked at the FDA under former Presidents Donald Trump and George W. Bush and now serves on the board of coronavirus vaccine maker Pfizer.

Though, he did note that it could be a different story once summer ends. “We’ll have to contend with this in the fall,” Gottlieb said. “If [BA.2] is still the dominant variant in places in the country that it really didn’t get in right now, it’ll start to spread in the fall as people’s immunity starts to wane, they get further out from their vaccination and their prior infection from Omicron.”