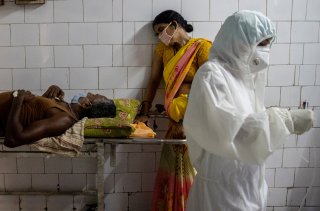 Roughly seventy poor countries will only be able to vaccinate 10 percent of their populations against the coronavirus because wealthier nations are hoarding more doses than they actually need, according to the People’s Vaccine Alliance, an organization that includes Amnesty International, Frontline AIDS, Global Justice Now, and Oxfam.

The most recent data, which was culled from analytics company Airfinity that examined deals completed between countries and the eight leading vaccine candidates, revealed that wealthy nations representing just 14 percent of the world’s population have purchased 53 percent of all of the most promising vaccine doses available.

The data also pointed toward the fact that sixty-seven low and lower-middle-income countries are at risk of being left behind as richer nations are seemingly only months away from escaping the pandemic’s ten-month-long grip. Five of those countries—Kenya, Myanmar, Nigeria, Pakistan, and Ukraine—have reported about 1.5 million coronavirus cases among them.

“The hoarding of vaccines actively undermines global efforts to ensure that everyone, everywhere can be protected from COVID-19. Rich countries have clear human-rights obligations not only to refrain from actions that could harm access to vaccines elsewhere but also to cooperate and provide assistance to countries that need it,” Steve Cockburn, the head of economic and social justice at Amnesty International, said in a release.

“By buying up the vast majority of the world’s vaccine supply, rich countries are in breach of their human rights obligations. Instead, by working with others to share knowledge and scale up supply, they could help bring an end to the global COVID-19 crisis.”

The findings by the People’s Vaccine Alliance are consistent with September’s “The Goalkeepers Report” by Bill & Melinda Gates Foundation.

Modeling from Northeastern University was used to forecast that twice as many people could die from the ongoing pandemic if wealthy countries decide to hoard the first two billion vaccine doses. The report also noted that the pandemic disproportionately impacts women, racial and ethnic minority groups, and those living in extreme poverty.

“The pandemic, in almost every dimension, made inequity worse,” billionaire philanthropist Bill Gates said in a conference call with reporters. “The poorer countries are suffering far more than the richer countries because of a lack of fiscal resources to go on.”