Could Coronavirus Save the World from a Rough Flu Season? 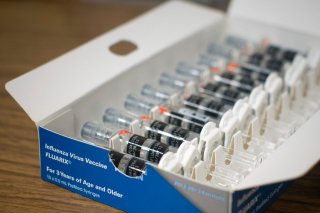 For the past couple of months, health officials and doctors have been warning about the quickly approaching flu season, saying that a devastating one-two punch of the seasonal virus plus the coronavirus pandemic has the potential to overwhelm the U.S. health-care system.

However, ongoing global efforts to curb the further spread of the coronavirus—which include face-mask mandates, social-distancing measures and stay-at-home directives—could mean that the flu season won’t be a major factor in the United States this year.

Moreover, experts have said that limited air travel have already helped some countries reduce the importation of the flu, which could ultimately keep their numbers low.

A milder flu season would be welcome news during this global pandemic, as it has the potential to save tens of thousands of lives.

According to a 2017 collaborative study by the U.S. Centers for Disease Control and Prevention and global health partners, between 291,000 and 646,000 people worldwide die from influenza-related respiratory illnesses each year.

These figures are considerably higher than the World Health Organization’s previous estimates of 250,000 to 500,000 deaths.

In the United States, on average, between nine and forty-five million Americans catch the flu each year, which leads to anywhere between 12,000 to 61,000 deaths. According to the CDC, between October 2019 and April 2020, there were an estimated thirty-nine to fifty-six million influenza infections and 24,000 to 62,000 fatalities.

In what could be considered good news for the United States, currently, Australia, Brazil, and other countries in the Southern Hemisphere are in the midst of the winter flu season, and the data is indicating that the overall number of flu cases there is relatively low.

“The various hygiene and physical distancing measures implemented by member states to reduce SARS-CoV-2 virus transmission might also have played a role in mitigating influenza virus transmission,” the WHO said in a recent report.

“Globally, influenza activity was reported at lower levels than expected for this time of the year. In the temperate zones of the Southern Hemisphere, the influenza season has not commenced. Despite continued or even increased testing for influenza in some countries in the southern hemisphere, very few influenza detections were reported.”

Only time will tell, though, whether the United States will be as fortunate.

In preparation for the flu season, the four manufacturers of flu vaccines have already confirmed that they will ship roughly 200 million doses across the United States this year—which is 19% higher than last season.

AstraZeneca, the maker of the FluMist nasal spray vaccine, noted that it’s ramping up production by 25% due to expected increased demand this year.

However, fewer than half of U.S. adults and about 60% of children typically get the flu shot each year, according to CDC’s 2018-2019 data.

The shot’s effectiveness ranges from 20% to 60% each season—depending on the types of strains circulating.