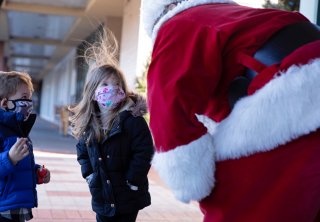 The fast-approaching Christmas holiday season has the potential to dwarf the number of coronavirus infections and deaths related to Thanksgiving, according to White House coronavirus advisor Dr. Anthony Fauci.

The nation’s top infectious disease expert noted that Thanksgiving travel and gatherings typically take place for a shorter period of time, while Christmas events may continue through New Year’s celebrations.

He added that new infections are emerging from “modest-sized gatherings of family and friends in a home,” including those with about ten people, which is still allowed in many counties and states.

Fauci, whose eightieth birthday is on Christmas Eve, admitted that he will forego celebrating the holiday with his daughters for the first time in more than thirty years.

The director of the National Institute of Allergy and Infectious Diseases warned that the country hasn’t yet seen the full extent of new coronavirus cases related to the Thanksgiving holiday, saying that those numbers generally take between two and three weeks to emerge.

“Which is the reason why I’m so concerned, because the blip of Thanksgiving isn’t even here yet,” he said.

“We’re getting those staggering numbers of new cases and hospitalizations before we even feel the full brunt of the Thanksgiving holiday.”

Currently, on average, more than 200,000 Americans are testing positive for the coronavirus each day, according to data from Johns Hopkins University.

In the latest projection from the Institute of Health Metrics and Evaluation (IHME), coronavirus cases in a “worst-case scenario” could peak around January 20, which is the same day as presumptive President-elect Joe Biden’s inauguration ceremony in Washington DC. IHME has estimated that the number of new daily infections could reach more than one million “if states do not re-impose any social-distancing mandates,” the research institute said.

On Sunday, Dr. Deborah Birx, the White House coronavirus response coordinator, cautioned that the aftermath of the coronavirus surge seen across the United States is expected to be one of the most difficult events in the history of the country.

“The reality is December and January and February are going to be rough times,” he said. “I actually believe they’re going to be the most difficult in the public health history of this nation, largely because of the stress that’s going to be put on our health-care system.”