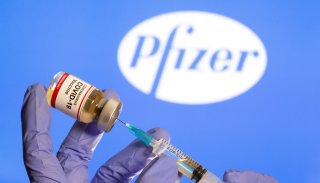 The United States could be on the fast-track to normal life again if enough Americans are willing to roll up their sleeves for a coronavirus vaccine, according to White House coronavirus advisor Dr. Anthony Fauci.

“So, if we can get the overwhelming proportion of the population vaccinated by let’s say the end of the second, the beginning of the third quarter—by the time we get into mid-fall of 2021, we can be approaching some level of normality,” he told CNBC Wednesday during the Healthy Returns conference.

More specifically, Fauci said that between 75 percent and 85 percent of the entire U.S. population will need to get inoculated, which would naturally create an “umbrella” of immunity to the virus that has already infected seventeen million and killed at least 307,000 over the past ten months, according to the latest data from Johns Hopkins University.

“That would be able to protect even the vulnerable who have not been vaccinated or those in which the vaccine has not been effective,” the nation’s top infectious disease expert added.

The herd immunity approach—similar to what was pursued in Sweden—aims to have enough people within a population become immune to a disease, often through vaccination or natural infection, to make its spread unlikely. As a result, the entire community is protected, even those who are not immune, according to Harvard Medical School.

Fauci, who will remain in a similar position next year as an advisor to President-elect Joe Biden, has predicted that enough doses of the potentially life-saving vaccine will be available to all Americans beginning in late March and early April.

Like former Presidents Barack Obama, George W. Bush, and Bill Clinton, he added that he is open to getting inoculated publicly to “serve as an example of the importance of getting vaccinated” and to give more confidence to those who are hesitant about receiving the shot.

Nearly three million of Pfizer’s recently approved coronavirus vaccine doses have been shipped to 145 designated locations across the United States. More doses could be on the way if Moderna is granted an emergency use authorization for its vaccine candidate this week.

Fauci said that he would like to see about forty million doses available by the end of this year, which would be sufficient to inoculate twenty million individuals since the vaccine requires two doses.

However, Dr. Moncef Slaoui, the chief science advisor for the Trump administration’s Operation Warp Speed, admitted at the conference that it is possible that the year-end target could fall short by roughly three million due to fluctuations in the production process.

The U.S. Centers for Disease Control and Prevention has already provided states with guidance that recommends prioritizing frontline health-care workers and those living in nursing homes for the initial shots.