How to Avoid Getting Coronavirus: Roll Down Your Car Window 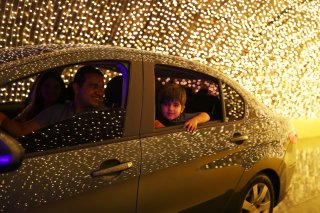 Rolling down windows while riding in a car has been shown to reduce coronavirus transmissions, according to a new study conducted by researchers at Brown University.

The research, published in the journal Science Advances, was able to analyze airflow patterns inside a car using computer models. The simulations revealed that opening windows—more windows the better—created certain airflow patterns that dramatically reduced the concentration of coronavirus-laden airborne particles exchanged between a driver and a single passenger.

Utilizing the car’s ventilation system didn’t circulate the air nearly as well as a few open windows, the researchers added.

“Driving around with the windows up and the air conditioning or heat on is definitely the worst scenario, according to our computer simulations,” the study’s co-lead author Asimanshu Das, a graduate student in Brown’s School of Engineering, said in a news release.

“The best scenario we found was having all four windows open, but even having one or two open was far better than having them all closed.”

The researchers stressed that there is no way to completely eliminate coronavirus transmission risk in a car. The best way, they said, is to follow current guidelines set forth by the U.S. Centers for Disease Control and Prevention, which is to postpone travel and stay home.

One of the chief reasons why opening windows is better in protecting oneself from virus transmission is that the added airflow increases the number of air changes per hour inside the vehicle.

When all of the car’s windows are open, this creates two relatively independent flows on either side of the vehicle. Since the passengers in the simulations were sitting in opposite sides, very few particles ended up being transferred between the two individuals. The driver, however, is considered slightly more at-risk because the airflow tends to move from the back to front.

“When the windows opposite the occupants are open, you get a flow that enters the car behind the driver, sweeps across the cabin behind the passenger and then goes out the passenger-side front window,” the study’s senior author Kenny Breuer, a professor of engineering at Brown, said in a release.

“That pattern helps to reduce cross-contamination between the driver and passenger.”

The researchers, though, noted that rolling down windows shouldn’t be considered a substitute for mask-wearing inside the vehicle. Still, they were satisfied that the study provided valuable new insights into a subject matter that has received little to no attention.

“This is the first study we’re aware of that really looked at the microclimate inside a car,” Breuer said. “There had been some studies that looked at how much external pollution gets into a car, or how long cigarette smoke lingers in a car. But this is the first time anyone has looked at airflow patterns in detail.”