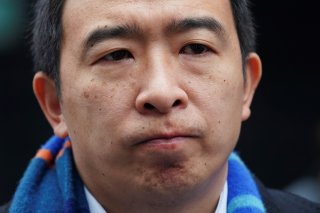 When businessman Andrew Yang ran in the Democratic primaries for president in the 2020 cycle, his signature proposal was what he called the “Freedom Dividend,” which would have given a UBI (universal basic income) of $1,000 a month to every adult in the country.

“This is independent of one’s work status or any other factor,” Yang’s campaign website said of the Freedom Dividend proposal. “This would enable all Americans to pay their bills, educate themselves, start businesses, be more creative, stay healthy, relocate for work, spend time with their children, take care of loved ones, and have a real stake in the future.”

The proposal, Yang claimed at the time, “would permanently grow the economy by 12.56 to 13.10 percent—or about $2.5 trillion by 2025—and it would increase the labor force by 4.5 to 4.7 million people.” Yang proposed to pay for the scheme with a Value-Added Tax (VAT), while also giving those currently receiving federal benefits to either keep their current benefits or enroll in Yang’s Freedom Dividend. The proposal also entailed the establishment of a financial transactions tax, while also assuming that the resulting economic growth would pay for some of the cost as well.

Yang argued at the time that the payments wouldn’t be seen as “welfare,” since everyone was getting a check. He also argued against means-testing, for that same reason. It was a proposal coming from a candidate not considered a socialist, or even necessarily a person of the political left.

Andrew Yang wasn’t the only presidential candidate last time who proposed widespread payments. Sen. Cory Booker of New Jersey, when he ran for president in the 2020 cycle, proposed “baby bonds,” which would provide $1,000 savings accounts to every child born in the United States, with the recipients unable to access the funds until they turned eighteen.

Indeed, there are versions of Universal Basic Income that already exist. The Alaska Permanent Fund, since the 1970s, has paid out annual payments of around $1,600 from oil revenues to every resident of that state. Something resembling a UBI was proposed in the 1960s under both the Johnson and Nixon administrations, and it was a frequent demand during the civil rights movement, including by Martin Luther King.

In recent years, Stockton, California, under former mayor Michael Tubbs, experimented with sending $500 a month for two years to families. That experiment has been called a success, although Tubbs was defeated in his reelection bid last year.

Yang’s presidential campaign, while it gained a decent amount of media coverage, didn’t progress very far, and Yang dropped out of the race on the night of the New Hampshire primary, after finishing 7th. Yang was out of the primary race prior to the onset of the pandemic in the United States. But since the end of Yang’s presidential campaign, the Trump and Biden Administrations have each passed stimulus packages that have presented checks directly to Americans.

So the question has been asked: has Andrew Yang’s Freedom Dividend idea, once seen as a pie-in-the-sky solution, been vindicated?

That question was raised in Forbes, around the time of the passage of the CARES Act by Zack Friedman.

“While Yang did not create UBI, he advocated for UBI principally due to job losses stemming from automation,” Friedman writes. “Universal basic income has been supported by everyone from Martin Luther King, Jr. and Bernie Sanders to Mark Zuckerberg and Elon Musk. Yang has said that with the advent of robots, self-driving cars and other technologies, our lives will improve. However, Yang believes that automation will cause one-third of all Americans to lose their job in the next 12 years. As a result of these job losses, Yang says, Americans could struggle to start a family, afford living costs or save for education or retirement.”

More recently, HuffPost looked at the question of whether Yang deserves credit for the embrace of stimulus checks.

“I give him a lot of credit for popularizing the idea, but it’s so old,” journalist Annie Lowrey, a staff writer at The Atlantic who wrote a book calling for UBI, said of Yang, in the HuffPost article “Nobody except for him really is talking about UBI, but it’s giving people a new language to discuss what would have been called welfare.”

“I think our campaign contributed mightily towards the mainstreaming of cash relief,” Yang told HuffPost in the article. “I believe this to be true in part because of the resistance I received.

One big difference, of course, is that none of the three stimulus packages passed since the start of the pandemic has offered every American monthly checks forever. While the new child tax credit will be paid out in monthly payments, the $1,400 checks from the American Rescue Plan were a one-time payment.

As for Andrew Yang, he’s now running for mayor of New York City, and is widely seen as the frontrunner in the crowded race, per The Guardian. And among Yang’s proposals in his mayoral campaign is what he calls “A Basic Income For New York City.” Perhaps due to the realities of budgeting at the city government level, Yang’s proposal is a bit different from the one he proposed when he ran for president.

“A Yang administration will launch the largest basic income program in the country,” Yang’s campaign website says. “Through this program, 500,000 New Yorkers with the greatest need will receive a basic income that will help give them a path forward. Our goal is to end extreme poverty in New York City by putting cash relief directly into the hands of those who desperately need help right now, ensuring that every household has an annual income that is at least above extreme poverty, taking into account the true cost of living in New York City.”

Yang also plans to create what he calls a People’s Bank of New York City.