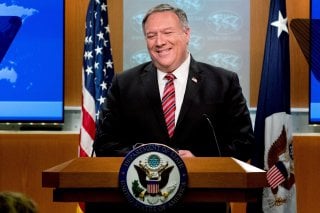 Secretary of State Mike Pompeo defended U.S. funding for the Wuhan Institute of Virology as a program “to protect American people from labs that aren’t up to standard” in a Fox and Friends interview on Wednesday.

U.S. officials have suggested that the 2019 novel coronavirus was initially released in an accident at the Wuhan laboratory. The institution’s coronavirus research had been supported by U.S. grants, attracting the ire of Republican politicians who blame the laboratory for the pandemic.

Rep. Matt Gaetz (R–Fla.) attacked U.S. funding for the laboratory last week, telling Fox News host Tucker Carlson that “at best, Americans are funding people who are lying to us and at worst, we're funding people who we knew had problems handling pathogens, who then birthed a monster virus onto the world.”

Democratic lawmakers have also called for confronting the Chinese government over a lack of transparency related to the coronavirus pandemic, although none have endorsed the laboratory-origin theory.

Pompeo, however, defended the research program against members of his own party.

“We spend American taxpayer dollars…to protect American people from labs that aren’t up to standard,” he said. “We try to bring our expertise from our National Institutes of Health [NIH], from our [Centers for Disease Control], to precisely prevent something like this.”

Recently-leaked State Department cables from 2018 show that U.S. officials had been concerned with safety issues at the Wuhan Institute of Virology.

Pompeo then addressed a Tuesday report in the New York Post pointing the finger at NIH infectious disease chief Dr. Anthony Fauci for $7.4 million in U.S. government grants to the now-controversial coronavirus research.

“I don’t know the details of the NIH grants,” Pompeo told Fox News. “Look, the United States, for a long time and continuing today, tries to help countries around the world who are conducting research on highly contagious pathogens.”

The Trump administration cut off one of the NIH grants for coronavirus research in China on Monday, stating that the NIH “does not believe that the current project outcomes align with the program goals and agency priorities.”

The research involved both collecting bat coronaviruses from the wild and running “gain-of-function” experiments aimed at determining whether the viruses could jump between species.

The NIH has defended its research as necessary for public health.

“Most emerging human viruses come from wildlife, and these represent a significant threat to public health and biosecurity in the US and globally, as demonstrated by the SARS epidemic of 2002-03, and the current COVID-19 pandemic,” the organization told Newsweek.

Fox News reported earlier in April that some U.S. officials believe that the novel coronavirus originated in the Wuhan Institute of Virology and escaped in a laboratory accident.

“It should be no surprise to you that we have taken a keen interest in that and we've had a lot of intelligence take a hard look at that,” Gen. Mark Milley, Chairman of the Joint Chiefs of Staff, said on April 14. “I would just say at this point, it's inconclusive, although the weight of evidence seems to indicate natural [origin], but we don't know for certain.”

Pompeo, however, has leaned into allegations, demanding increased transparency from China.

“We all need to get to the bottom of what actually happened here, not only for the current instant but to make sure something like this doesn’t happen again,” he said on Wednesday. “There are still many labs operating inside of China today, and the world needs to know that we’re not going to see a repeat of this in the days and weeks and months ahead.”