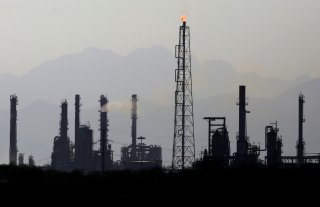 After news emerged that an Omicron variant of the coronavirus existed, the World Health Organization speculated that the strain could be more infectious and resistant to existing vaccines than other high-profile strains. Following this assessment, oil prices slumped more than 10 percent amid fears that new lockdowns could lead to decreasing demand for oil and gas.

Brent crude oil prices, which had trended above $80 per barrel in recent weeks, decreased to around $75; West Texas Intermediate declined to under $70.

Although the circumstances of the crash are alarming, the news of lower oil prices has come as a welcome surprise to President Joe Biden and the leaders of other developed nations, who have been engaged in a battle against the OPEC+ oil cartel to keep oil prices as low as possible. These efforts led Biden and the leaders of China, the United Kingdom, Japan, South Korea, and India to coordinate the release of oil held within their strategic reserves, including fifty million barrels from the U.S. Strategic Petroleum Reserve.

OPEC+, a bloc of nations including the traditional OPEC nations as well as Russia, has argued in favor of higher oil prices. In response to the developed bloc’s release of oil, some of its members have indicated they might cut production targets in January to offset the extra oil in circulation. The bloc’s next meeting is scheduled for December 1.

Declines in oil prices have come amid a wider financial downturn in response to the news of the Omicron variant of the coronavirus, which has largely remained confined to South Africa but has also appeared in Europe, the Middle East, and Asia. The new strain’s emergence led the United States and the European Union to increase travel restrictions to and from southern Africa. These moves have been controversial and South African health officials have complained that the American and European reaction is disproportionate to the science, which has yet to determine the level of danger posed by the Omicron variant.

Prior to the Omicron scare, crude oil prices had reached the highest point since the onset of the coronavirus pandemic, as demand for oil increased with the gradual rollback of travel restrictions amid widespread vaccinations in rich countries. The steady increase had led some analysts to predict that prices could exceed $100 per barrel by the end of the year, although these predictions now seem unlikely.