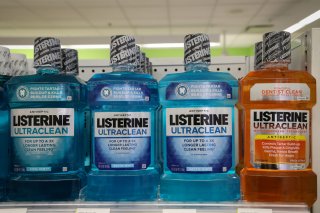 Mouthwashes that can be purchased at your local drugstore have been shown to be able to kill the coronavirus in human saliva within thirty seconds, according to a new study conducted by researchers at Cardiff University in Wales.

The research, which has not yet been peer-reviewed or published in a medical journal, tested the virus-eliminating effectiveness of a handful of different mouthwashes containing ethanol/essential oils, cetylpyridinium chloride (CPC), and povidone-iodine.

The researchers eventually discovered that three of the tested mouthwashes neutralized the virus completely.

“This study adds to the emerging literature that several commonly-available mouthwashes designed to fight gum disease can also inactivate the SARS-CoV-2 coronavirus (and other related coronaviruses) when tested in the laboratory under conditions that are designed to mimic the oral/nasal cavity in a test tube,” Dr. Richard Stanton, the lead author of the study, said in a statement.

“People should continue to follow the preventive measures issued by the U.K. government, including washing hands frequently and maintaining social distance.”

Stanton added that the results of the upcoming clinical trials are expected early next year.

In another similar study out of Penn State College of Medicine in September, researchers there found that certain oral antiseptics and mouthwashes were effective in “inactivating” human coronaviruses.

The study’s results, which were published in the Journal of Medical Virology, suggest that some of these oral-hygiene products might be useful for reducing the viral load in the mouth after infection—and perhaps limit the spread to others.

“While we wait for a vaccine to be developed, methods to reduce transmission are needed,” Craig Meyers, the study’s lead author and professor of microbiology and immunology and obstetrics and gynecology, said in a statement. “The products we tested are readily available and often already part of people’s daily routines.”

The 1 percent baby shampoo solution—often used by doctors to rinse the sinuses—was able to neutralize more than 99.9 percent of human coronavirus after two minutes of contact.

Many mouthwash and gargle products were also found to be highly effective, as several neutralized more than 99.9 percent of the virus after only thirty seconds of contact.

Although the researchers didn’t specifically test SARS-CoV-2 in the study, this particular virus is genetically related to the other human coronaviruses tested, leading the researchers to believe that the results would likely be similar.