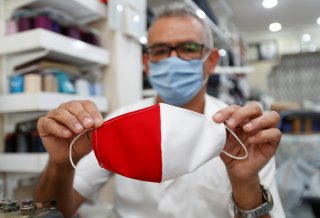 Face masks and coverings already have been proven to help prevent the spread of the coronavirus—but, apparently, they can also offer heightened immunity against the contagion, according to a new study out of the University of California, San Francisco.

Most medical experts are in agreement that face masks prevent the wearer from launching virus-laden droplets into the air, potentially infecting those nearby.

It is, however, also likely that face masks, by blocking even some of the droplets that one inhales, can reduce the overall risk of getting seriously ill from the coronavirus.

“The more virus you get into your body, the more sick you are likely to get,” the study’s author Dr. Monica Gandhi, an infectious disease specialist at UC San Francisco, said in a news release.

Her research is an extension of a particular paper that she co-authored in July that was published in the Journal of General Internal Medicine, which presented “the hypothesis that universal masking reduces the ‘inoculum’ or dose of the virus for the mask-wearer, leading to more mild and asymptomatic infection manifestations.”

Gandhi pointed out that in the latest wave of infections in the United States, the more expansive use of masks and coverings could be an important factor for the lower mortality rates.

Such trends are apparent in other countries, such as Japan, Taiwan, Thailand, South Korea, and Singapore, where mask-wearing was more quickly embraced early on in the pandemic. Severe cases of the virus and fatality rates there have remained relatively low.

Gandhi noted that wearing a mask appears to increase the probability that an infected individual will be asymptomatic—which means less serious illnesses from the coronavirus.

“Masks can prevent many infections altogether, as was seen in health-care workers when we moved to universal masking,” she said.

“We’re also saying that masks, which filter out a majority of viral particles, can lead to a less severe infection if you do get one. If you get infected but have no symptoms—that’s the best way you can ever get a virus.”

According to the U.S. Centers for Disease Control and Prevention, the proportion of asymptomatic cases is currently estimated to be about 40 percent.

Gandhi added that milder infections would help ease the burden on the health-care system, save even more lives, and push the general population closer to herd immunity before a viable vaccine becomes available.

She is still holding out hope that more Americans will voluntarily wear face masks when out in public.

“We messaged that mask-wearing will protect other people, and that did not seem to convince our country as much as we would have hoped,” Gandhi said.

But “if you think something’s going to help you or your family, you are going to do it more than if you think you’re helping others.”