U.S. Senate Asks Mike Pompeo To Push WHO On Including Taiwan 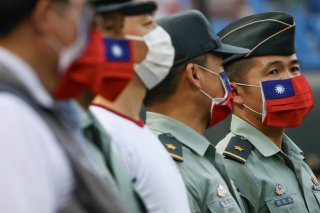 The U.S. Senate unanimously voted on Tuesday to ask the Secretary of State “to develop a strategy to regain observer status for Taiwan in the World Health Organization” in a bipartisan jab at China.

The dispute between the Chinese government and the self-ruling island of Taiwan has heated up with the coronavirus pandemic. Taiwanese authorities are asking to participate in a World Health Organization (WHO) meeting on coronavirus prevention next Monday, but Beijing is arguing that Taiwan is actually a renegade province of China that cannot conduct diplomacy.

The U.S. Senate bills commands the Department of State to “regularly report to Congress on U.S. actions and plans to strengthen Taiwan's official and unofficial diplomatic relationships around the world” and report on its ability to attend WHO meetings as an observer.

“Since 2017, China has blocked Taiwan from participating in the World Health Organization,” Sen. Jim Inhofe (R–Okla.) said. “That is unacceptable—and as we look at the global response to the coronavirus pandemic, China’s diplomatic bullying is even more egregious.”

Taiwanese observers had been able to participate in WHO meetings under the name “Chinese Taipei” from 2009 to 2017. The WHO claimed that it has “no mandate” to invite Taiwan to the upcoming meeting in May.

American and Taiwanese critics have accused the WHO of ignoring warnings from Taiwan about the coronavirus in deference to Chinese sensitivities.

Taiwan has suffered only 7 deaths from the novel coronavirus disease (COVID-19) since the virus first arrived on January 21, while China has reported over four thousand deaths since in roughly the same time period.

Secretary of State Mike Pompeo has since implied that the virus—which emerged in Wuhan, China—was the result of a lab accident covered up by the Chinese government.

He told Focus on the Family on May 11 that “the Chinese Communist Party tried to suppress information about this virus, about where it began, about how it started, about how it was being transmitted from human to human, indeed employed the World Health Organization to further that storyline.”

Pompeo has implied that the Trump administration could push for a U.S.-led alternative to the WHO.

The Senate vote was a sign of bipartisan agreement with Pompeo’s criticism, but it was not necessarily a vote of confidence in Pompeo’s strategy.

“China bears responsibility for its efforts to cover up the initial extent of the virus and its continued efforts to obfuscate the scientific information we need to develop vaccines and treatments,” Sen. Chris Murphy (D–Conn.) said in a recent interview with the National Interest.

“Is the right response to withdraw from the WHO? Because if your complaint is that China has too much influence at the WHO, you essentially are exacerbating the problem that you’re seeking to solve by pulling the United States out," he concluded. "I just haven’t seen any action from this administration that actually addresses the complaints they make about China.”