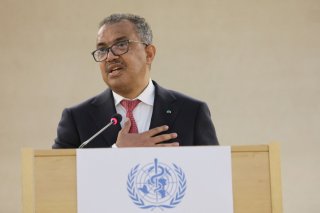 After the monkeypox outbreak a global health emergency this past weekend, on Wednesday the World Health Organization (WHO) advised men at high risk of contracting the virus to consider reducing their sexual partners “for the moment.”

WHO director-general Tedros Adhanom Ghebreyesus noted, per the Associated Press, that 98 percent of all reported monkeypox cases since May have been among men who have sex with other men.

“For men who have sex with men, this includes for the moment, reducing your number of sexual partners, reconsidering considering sex with new partners, and exchanging contact details with any new partners to enable follow up if needed,” he said.

Tedros also called on social media platforms and news organizations to take necessary steps to counter harmful misinformation. WHO officials stressed that monkeypox can infect anyone, regardless of sexual orientation, in close contact with a patient or their contaminated clothing or bedsheets.

“The stigma and discrimination can be as dangerous as any virus and can fuel the outbreak. As we have seen with Covid-19 misinformation, and this information can spread rapidly online,” he continued.

The WHO also cautioned that while cases have so far been concentrated primarily within gay and bisexual communities, there is little evidence to suggest that the fast-spreading virus will remain confined to those groups.

After roughly two months into the outbreak, there are more than 19,000 cases of monkeypox across seventy-six countries, according to the Centers for Disease Control and Prevention (CDC). In the United States, there are nearly 3,600 monkeypox infections across more than forty-five states. However, health officials are not exactly sure how fast the disease has spread, largely due to the fact that they have only limited information about people who have been diagnosed and they are unsure how many infected individuals might be spreading it unknowingly.

“We know very clearly that one of the main modes of exposure for this particular illness is through direct contact, close contact, skin to skin contact, possibly even face to face contact, exposure to droplets or virus that may be in the mouth,” explained Dr. Rosamund Lewis, the WHO’s technical lead for monkeypox.