Could the Monkeypox Virus Become a New STD? 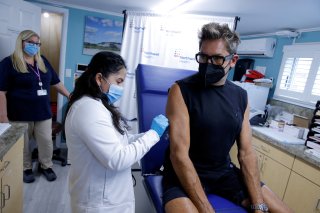 Amid the fast-rising cases of monkeypox both here in the United States and abroad, medical experts are now fearing that the virus is on the verge of becoming an entrenched sexually transmitted disease (STD), much like HIV, gonorrhea, and herpes, according to a new Associated Press report.

Roughly two months into the outbreak, the Centers for Disease Control and Prevention (CDC) has already confirmed more than 2,600 monkeypox infections across more than forty-five states and acknowledged that it expects the outbreak to grow considerably in the coming weeks. Globally, there are more than 16,500 cases of monkeypox across seventy countries.

Health officials, however, are not exactly sure how fast the virus has spread, largely due to the fact that they have only limited information about people who have been diagnosed and they are unsure how many infected individuals might be spreading it unknowingly.

Shawn Kiernan, of the Fairfax County Health Department in Virginia, told the news agency that there is reason to be cautiously optimistic about containing the virus because the outbreak so far appears to be concentrated within one group of people—men who have sex with men, though health officials have stressed that anyone can catch the disease. He added that a spread of the virus to heterosexual people would be a “tipping point” that may happen before it is widely recognized.

The CDC has stated that 1.5 million U.S. men are considered at high risk for the infection.

According to Dr. Edward Hook III, emeritus professor of infectious diseases at the University of Alabama at Birmingham, a spillover into the heterosexual population is just a matter of time, which could potentially put the virus on a fast track to becoming an endemic sexually-transmitted disease (STD). If this indeed occurs, the Associated Press reported that it “will be yet another challenge for health departments and doctors already struggling to keep up with existing STDs.”

Kiernan noted that such work on STDs has long been underfunded and understaffed and much of it was simply put on hold during the ongoing Covid-19 pandemic. HIV and syphilis were prioritized but work on common infections like chlamydia and gonorrhea, cases of which have been rising in recent years, only amounted to “counting cases and that’s about it.”

“By and large,” Hook told the news agency, doctors “do a crummy job of taking sexual histories, of inquiring about and acknowledging their patients are sexual beings.”

The current surge in monkeypox cases is believed to be highly unusual because they are occurring in North American and European countries where the virus is not endemic. Monkeypox is usually found in Central and West African rainforests where animals that carry the virus live. Animal hosts can include a range of rodents and non-human primates.

According to the CDC, the virus, which often features a painful rash that spreads all over the body, is most easily spread via open contact with the sores of an infected individual, but it can also spread through contact with materials that have the virus on it, such as shared bedding and clothing. Airborne transmission of monkeypox has not yet been reported.