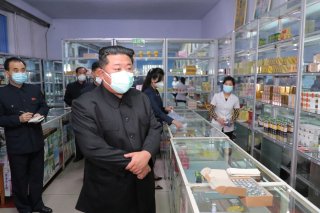 North Korea on Friday confirmed an “explosive” COVID-19 outbreak that has led to six total deaths and 350,000 potential cases across the country since April, according to South Korea’s Yonhap News Agency.

In its English-language report, North Korea’s state-run Korean Central News Agency (KCNA) wrote that “on May 12 alone, some 18,000 persons with fever occurred nationwide and as of now up to 187,800 people are being isolated and treated,” adding that one of the people who died was confirmed to have been infected with the highly transmissible Omicron variant.

Pyongyang had previously claimed that the country was coronavirus-free for more than two years.

“The simultaneous spread of fever with the capital area as a center shows that there is a vulnerable point in the epidemic prevention system,” he was quoted as saying.

“It is the most important challenge and supreme tasks facing our Party to reverse the immediate public health crisis situation at an early date, restore the stability of epidemic prevention and protect the health and wellbeing of our people,” he continued.

Kim also called on all provinces to lock down in an effort to prevent any further spread of the “malicious virus.”

“Suspected cases are said to be rising explosively in North Korea recently due to a massive Covid-19 outbreak. We will hold discussions with the North Korean side about details,” he added.

Meanwhile, White House press secretary Jen Psaki told reporters on Thursday that the United States does not have immediate plans to provide vaccines to North Korea from its own supplies, although it would support the provision of vaccines via international organizations like COVAX.

A State Department spokesperson, however, told Yonhap in an email that “to date, the DPRK [Democratic People’s Republic of Korea] has refused all vaccine donations from COVAX.”

He continued: “We note the media reports regarding the outbreak of Covid-19 in the DPRK. We are concerned about how this might affect the North Korean people and continue to support the provision of vaccines to the DPRK.”