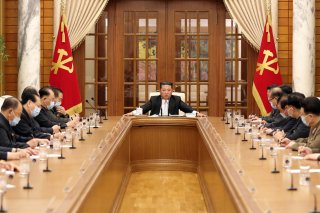 The North Korean government has announced a state of “gravest national emergency” after it confirmed claims by state-run media that the first COVID-19 outbreak had been detected in Pyongyang.

“A most serious emergency case of the state occurred,” the Korean Central News Agency (KCNA) reported on Thursday. “A break was made on our emergency epidemic prevention front, where [the government] has firmly defended for two years and three months from February 2020.” It indicated that testing samples taken from residents of the North Korean capital the previous week had revealed the presence of a subvariant of Omicron called BA.2. No additional information was provided on an estimated caseload or how the virus had entered the country.

Following the announcement, North Korean supreme leader Kim Jong-un ordered a nationwide lockdown, calling on all cities to “strictly lock down” their neighborhoods. He also announced that the country’s emergency reserve medical supplies would be readied for a potential rise in cases.

Pyongyang’s announcement on Thursday marks the first time since the beginning of the pandemic that COVID-19 was confirmed to be in North Korea. Over the past two and a half years, Kim’s government has insisted that the country was COVID-free—a claim defying common sense, as the outbreak originated in neighboring China and has remained in that country despite Beijing’s increasingly strenuous efforts to stamp it out.

North Korea’s insistence that it was free from COVID-19 led it to decline repeated offers of donated vaccinations from the international community, and there remains no record of any North Koreans receiving the vaccine, although the World Health Organization has estimated that as many as 64,000 of its roughly 25 million people have been tested. North Korea’s border with China has remained tightly closed since the beginning of the pandemic, although some goods are known to have slipped through.

The presence of COVID-19 in North Korea, which outside observers have speculated could severely damage the country’s precarious healthcare system if it spreads out of control, could allow for improved relations with South Korea. To the south, President Yoon Suk-yeol, who was sworn into office on Tuesday, vowed that humanitarian assistance to North Korea would not be predicated on political gains—seeming to suggest that Seoul could send medical assistance to Pyongyang as a way to build goodwill.

Before the announcement of the COVID-19 outbreak, North Korea had fired several ballistic missiles and appeared to be preparing for a nuclear test.