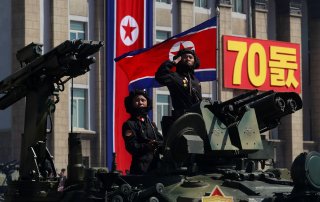 The North Korean regime, for most of the past year, has been denying that there are any cases of coronavirus, while at the same time engaging in what appears to be efforts to mitigate that same pandemic.

Now, the regime has reportedly taken another step, in closing bridges between North Korea and China.

According to a report by Daily NK, the North Korean regime has closed nearly all of the bridges on the border in North Hamgyong Province, with the exception of one.

“On Jan. 29, the government handed down another strong social distancing order along the border to respond to COVID-19, and three days later on Feb. 1 they closed all the bridges in North Hamgyong Province,” the Daily NK’s source said. “They ordered the bridge in Saebyul County to remain open for emergencies.”

The regime had already not allowed North Koreans to cross the bridges, out of fear of bringing the virus into the country. But now they have been formally closed.

“There have been many cases where some traders have crossed the border to import needed goods following orders from the government,” the Daily NK source said. “The authorities left one of the bridges open as a way to [reduce the number of people crossing the border] while allowing these traders to continue their activities.”

North Hamgyong Province is in the far Northeastern part of North Korea. It shares a large border with China but does not comprise the entirety of the border between the two countries.

Last October, Kim Jong-un applauded North Korea’s efforts in keeping the virus out of that country. At the same time, however, the World Health Organization reported that 3,373 North Korean nationals had been added to a “suspected” patient list. This led to other reports that the Party Foundation Day festivities had led to spread of the virus, which led to a delay in the start of the school year last fall. Also, North Korea reportedly ordered draconian social distancing measures in the country’s schools.

Meanwhile, in early February, a report from the COVAX Facility stated that it would distribute 1.992 million doses of the AstraZeneca/Oxford vaccine in the first half of 2021. North Korea has a reported population of 25.8 million.

According to a 2016 study that was reported by NK News, more North Korean defectors to South Korea come from North Hamgyong than any other province of the country, which means that more is known about life in that particular part of the country than most of the rest of North Korea.

Another report by Daily NK last year stated that a family of four had frozen to death outside Musan Station in N. Hamgyong Province.