Does North Korea Have a Social-Distancing Problem? 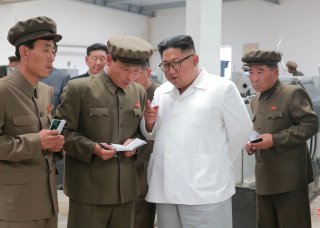 How, exactly, is North Korea coping with the coronavirus pandemic? Like most things in that country, it’s hard to know.

North Korea claimed, at least for a time, to have no coronavirus cases, despite sharing a border with China. Reports more recently have claimed that North Korea has in fact been hit hard by the pandemic, in a way that has affected everything from military readiness to the nation’s schools.

Meanwhile, there are also indications that North Korea has struck hard at those seen as not adhering to coronavirus protocols-with South Korean intelligence reporting in October (per NPR) that North Korea had in fact executed a rule-breaker, a man who had brought goods across the border from China. The country, according to the report, has refused delivery of 110,000 tons of rice from China.

Now, a new report says North Korea has taken additional social distancing measures in its effort to stop the spread of the disease.

According to Daily NK, North Korean authorities have issued what’s described as an emergency order to enforce social distancing in workplaces, including farms and other public places. The publication’s source, in North Hamgyong Province, said that the regime has ordered workers to not work together in groups.

However, there has been some resistance from workers who find the order impractical.

“Workplace staff point out that there’s only one workspace and machinery is bunched together, so it’s impossible to create workspaces by dividing them up,” the source said, adding that, “at collective farms, too, farmers are saying it’s difficult to work across divided spaces.”

But ahead of the upcoming campaign known as the “80-day battle,” which has set higher production goals, workers have become overwhelmed by the rules, which require them to work in shifts.

Kim Jong-un, at the military parade in October, is said to have touted North Korea’s ability to keep out the virus. But it was that parade that is said to have kicked off a surge of the virus in the country, infecting thousands of North Koreans. It also did not appear that many attendees were wearing face masks. In mid-October, not long after the parade, it was reported that North Korea’s schools had been delayed from their planned opening, and another report a few weeks later said that schools would not open in North Korea this fall at all.

The Centers for Disease Control says, in its most recent guidance, that North Korea has a “level 4,” meaning “Very High Level of COVID-19 in North Korea.” Travelers are cautioned to "avoid all travel to North Korea,” and that “travel may increase your chance of getting and spreading COVID-19.”