No School in North Korea for the Rest of the Year: Coronavirus to Blame? 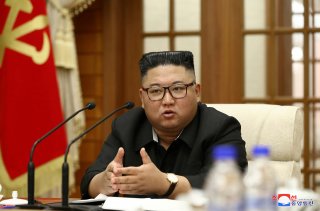 Reports in mid-October stated that North Korea had delayed the opening of its schools into November, following indications of a possible coronavirus outbreak in that country, following the celebration of the Workers' Party Foundation Day on October 10. Many students had participated in those festivities, and are thought to have caught the disease in the process.

November has arrived, and now a new report says that school has not resumed--and won’t before the end of 2020.

According to Daily NK, the country “has decided it will not open schools this autumn semester and recently notified schools to that effect.” Instead, teachers will hold home visits and video lectures, which has been the case so far this fall.

The news outlet’s source says that North Korea’s education ministry informed schools at the end of October that there will not be any more in-class instruction this year, and that “there’s talk that students will have to wait until February or March before they can go to school.” These lessons, according to a report last month, have entailed cramming “a week’s worth of material into a single hour of instruction.”

There was also talk, in that same report in October, that North Korea has had trouble procuring the materials it uses to heat its classrooms in the winter, including coal and firewood.

Some teachers, the source of this week’s story said, have even asked their students for money.

“Teachers are recording their weekly lectures and sharing them on memory cards every week, and the education ministry is encouraging these kinds of video lectures,” Daily NK’s source said. “In Pyongyang, this is possible because almost all students have a computer or tablet at home.”

Also in North Korea, university students who participate in the Party Foundation Day events have been ordered to remain isolated on campus. This is the case whether the students are from Pyongyang, or elsewhere in North Korea.

“The parents of the students in isolation [at their dorms] are coming to the university deans in tears asking about what they need to do, while parents living outside of Pyongyang are strongly protesting the fact that their kids can’t come home,” Daily NK’s source said.

North Korea is believed to have closed its borders in the early part of this year, and more recently passed an Emergency Quarantine Law, which was written in hypothetical terms about a potential pandemic that would affect the country. The law includes three separate categories of warnings, first-class, special-class and “super-class.”

There are also indications that households in North Korea have begun to cut back on consumption as a result of the pandemic, at least through the first nine months of 2020.

Image: North Korea's leader Kim Jong Un speaks during the 18th Meeting of the Political Bureau of the 7th Central Committee of the Workers' Party of Korea (WPK), in this image released by North Korea's Korean Central News Agency on September 30, 2020.