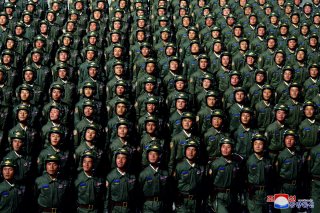 The North Korean regime has been running a series of articles in the state-run newspaper, Minju Choson, to explain how the new law works. In the series, which seems to couch a potential pandemic in hypothetic terms, the regime’s  Central Emergency Anti-epidemic Headquarter is “responsible” for those who test positive.

The law, like a lot of coronavirus countermeasures adopted by governments around the world, mandates three separate levels of warnings: first-class, special-class and “super-class.” The latter warning will go into effect when the disease has broken out in ‘the neighboring countries or regions and “could cause detrimental and destructive catastrophe’ to North Korea,” which would trigger a full lockdown of the country’s borders. That would seem to have already been the case, when the coronavirus spread though China in the early part of this year.

“If the initial test result is concluded as positive, the Central Emergency Anti-epidemic Headquarter should, most urgently, immediately organize secondary tests for all contacts — and the patient — using real-time checkup equipment,” the Minju Choson article says, per the NK News story. The articles also state that those involved with quarantining should wear PPE.

It’s unclear when exactly the law was adopted, although a North Korea expert quoted by the publication stated that it likely happened recently.

The country shut its borders back in January, shortly after the coronavirus emerged in neighboring China, and while the country’s government claims that it has not had any cases of coronavirus, indications, from a decrease in consumption to delays in the return of children to schools, indicate that that isn’t true.

That latter instance, per Daily NK, may have come due to children’s participation in the recent festivities surrounding Party Foundation Day.

Back in August, the Centers For Disease Control and Prevention, in the United States, issued a level 3 warning in regards to travel by Americans to North Korea.

“CDC recommends travelers avoid all nonessential international travel to North Korea. Travelers at increased risk for severe illness from COVID-19 should consider postponing all travel, including essential travel, to North Korea,” the warning said. The CDC also said that North Korea had not reported data on coronavirus cases to the World Health Organization.

The CDC warning did state, however, that “COVID-19 risk in North Korea is unknown.”

Meanwhile, Sue Mi Terry, a senior fellow and Korea Chair at the Center For Strategic and International Studies, wrote in early October that while South Korea was able to minimize the damage from the coronavirus pandemic, North Korea “maximized it.”

“South Korea has been a world leader in combatting the pandemic while keeping its economy running. By contrast,” she wrote. “North Korea has had to resort to draconian, brute-force methods to keep the contagion at bay. While those methods may be successful in limiting infections, they have done serious damage to an already anemic economy.”

Image: North Korea celebrates the 75th anniversary of the founding of the ruling Workers' Party of Korea, in this image released by North Korea's Central News Agency on October 10, 2020.