‘Living with Covid-19’: Korea Struggles to Balance Normalcy with Spike 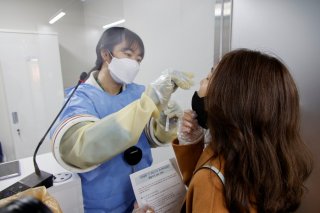 On a cold late November night in Seoul, Itaewon’s nightclubs were crowded, with lines stretching outside well past 2 am, and hospitals were filled to the brink of capacity.

Such is life under Korea’s “Living with Covid-19” program. Just one month into its implementation, new daily case numbers have surged over four thousand for the first time. Critical care units for coronavirus in the Seoul metropolitan area are ninety percent full. Daily caseload had already more than doubled before the Omicron variant of concern had been discovered.

But despite it all, President Moon Jae-in’s administration announced today “no retreat” from the current return to normalcy that began November 1.

For most of the past year, offices, restaurants, and entertainment businesses had their operations stifled by curfews and lockdown orders. Nightclubs and karaoke rooms in Seoul were made to shut down in October 2020 and kept closed through most of the next year. A curfew of 10 pm was imposed on restaurants and bars. There were even patrol vehicles driving along popular beaches to make sure no one stepped into the water.

A four-tiered color-coded system, with detailed rules for every kind of facility conceivable, governed what kinds of social activities were allowed, and with how many people, across the country. The orange-red menace on the map slowly expanded from Seoul across the whole county as no region was safe from quarantine measures.

With the rate of the population fully vaccinated approaching eighty percent, the government began planning for the next phase: a return to normalcy. It had been thinking about doing so since spring, but the Delta variant—and the accompanying increase in transmissions—slowed its plans.

The easing of restrictions now has been extremely beneficial to the hospitality and leisure industries. Restaurants had been beleaguered all year. Now crowds are bustling on once-empty Hongdae and Myeongdong streets, popular shopping and dining districts in Seoul. The legal limit for gatherings in Seoul, once as low as two together at night, has increased to ten.

Kwon Oh-sung, a wine importer in Incheon, told me: “My business activity is doing much better than last year. Wine sales were not bad in the Covid situation, because the off-trade market increased. But now on-trade market sales are increasing more and more in recent days after the relaxation of limitations.”

An increase in caseload was not unexpected. At a town hall on November 21, Moon acknowledged that the government had anticipated new cases rising as high as 10,000 a day. What has been unexpected—or unaccounted for—by the government was the rise in severe cases.

Kim Yun, a professor at Seoul National University College of Medicine, said that the government failed to establish sufficient intensive care unit (ICU) capacity prior to reopening. The government “made a step-by-step plan for returning to daily life,” Kim said in an interview with No Cut News, but it failed to strengthen medical system capacity or hire more health staff.

The increase in cases, particularly severe cases, is being driven in large part by cluster infections at nursing homes, Kim said. Professor Lee Jae-gap of the Hallym University Hospital also said on an MBC radio program that severe cases in the over-sixty age group are the “biggest problem” and “it cannot be solved by strengthening the vaccine pass system.”

The vaccine pass, also called a “quarantine pass,” has been applied to businesses deemed high-risk, such as karaokes, indoor gyms, saunas, and some nightclubs. Anyone who wants to enter must have a full vaccination status verified on their COOV smartphone app, or a negative PCR test result or proof of recovery from infection. Some gym and sauna owners complain that the inconvenience of the new system, particularly for older customers who dominate sauna use, has kept them from benefiting. Gym owners protested that they have to comply with the vaccine mandate while bar and cafe operators do not.

There had been speculation that the government would expand the scope of the vax pass to encompass all dining establishments, but on Monday, November 29, Moon refrained from doing so, citing the need for further study.

Instead, Moon stressed the need for booster shots and expanding hospital capacity. Mild cases should be treated at home. Korea is procuring access to a large supply of pills, he said. To promote demand for people to get their third jabs, the vax pass may require people to have their boosters in order to qualify as “fully-vaccinated” after six months.

There was no retreat, but there is a delay. The next phase of loosening restrictions, originally planned for mid-December, has been indefinitely put on hold.

Baby steps towards reopening travel are up in the air. On November 15, Korea and Singapore jointly opened up a quarantine-free travel lane for their respective countries, which might have been a model for later openings. But that was before Omicron sent travel stocks plummeting around the world.

“The policy is helping local businesses, but it is not for us yet,” the operator of a tour booking firm catering to international tourists told me. That also means many of the fashion shops that rely on Chinese tourists haven’t come close to recovering.

There has been an uptick in domestic tourism, however, with charter bus operators at Jeju island seeing a five-fold increase in bookings. The Korean public began to become more comfortable with dining and leisure activities even before the relaxation of restrictions began. Search data suggests interest in dining has been increasing since August. People who had felt fatigued by living with curfew took their convenience store beers to public parks after 10:00 pm.

The return now to established nightlife practices has introduced complications and new questions. Masks remain mandatory (and worn at extremely high rates compared to in other countries), but different establishments must determine how strictly they wish to enforce rules inside their walls. Baseball stadiums were open to fans eating chicken and drinking beer for the Korea Series, but fans weren’t allowed to chant.

Taxis are even harder to book now from popular nightlife districts than they were before. During the pandemic, many drivers quit, and now that demand is back up, the supply of drivers hasn’t returned.

Not every bar owner has seen their business recover. At one empty bar in Seoul’s Sindang district, south of Dongdaemun, the owner was trying to sell it and move to Jeju.