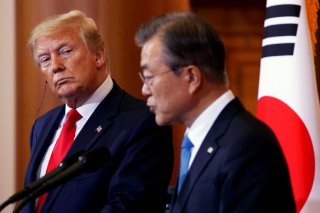 One of my most enduring memories is a snapshot in time; sunset from the top of the South Korean peak Seoraksan. We had walked all day, venturing from our Army camp to the base of the mountain in the early morning, and by the time we reached the little mountain hut at the summit, we were exhausted. Meanwhile, throngs of older Koreans, mostly grandfathers and grandmothers by my estimation, looked on, amused that two GIs had carried a ton of equipment for what was, to them, a leisurely hike. They offered us whiskey and gimbap from their packs for our efforts. After admiring the vista, we began our descent. All the while, I thought about how tragic it would be if the Korean conflict could not one day be resolved peacefully. The prospect of war seemed to always hang in the air, artillery and machine gun fire threatening to pierce the tranquility.

For a generation of older Koreans, the chance of a peaceful resolution in their lifetime seems to be evaporating, moment by moment. But a change in the U.S. policy in the fall could rekindle dormant efforts to pursue this goal. For the last three years, America’s North Korea policy has been characterized as schizophrenic, seemingly ready to make a deal but also bellicose. Most of all, the current White House showed a willingness to unilaterally pursue policies that escalated tensions and endangered one of America’s longest-standing and most fruitful alliances. A future administration (and even a continuation of the current one) could put diplomacy first and work to rebuild a somewhat frayed relationship with South Korea. Ultimately, American policymakers will need to be honest about just how much leverage it has with North Korea. Such a reassessment could restart joint efforts with South Korea to build positive links to North Korea, being careful not to incentivize misbehavior by the Kim regime.

During the Trump presidency, the Pentagon floated the idea of drawing down military forces based on the Peninsula. Doing so unilaterally, without a causal reason or significant concessions from Pyongyang, and absent consultation with our South Korean allies, is costly and wrongheaded. Instead, I would expect America to head in the exact opposite direction: working to re-engage our South Korean treaty allies and strengthen the longstanding U.S.-South Korea alliance. Beyond the general call to revitalize America’s diplomatic corps in the face of an unprecedented and lengthy assault on the integrity of the State Department, a changed administration could choose to add diplomatic personnel to the U.S. mission in Seoul. Putting diplomacy first means working with, instead of against, South Korean President Moon and, in a deliberate and concerted manner, bringing North Korea back to the negotiating table.

Working alongside our South Korean and other regional allies would also enable shoring up the sanctions program against the North Korean regime. But they should also be mindful of the limits of sanctions against a government with few unsanctioned entities, leaving even fewer effective levers to be pulled. These sanctions are also not without human costs—the long suffering people of North Korea are ultimately the ones that are the most punished by these far-reaching and expansive economic sanctions. If the regime is able to skirt them while the people suffer, the United States must ask itself if there is a better way to push the regime towards denuclearization and a peaceful reconciliation. Not to do so would be continuing with disastrous policies without end.

Dr. Welton Chang is Chief Technology Officer at Human Rights First. Prior to joining HRF, Welton was a senior researcher at the Johns Hopkins Applied Physics Laboratory, where he led teams and developed technical solutions to address disinformation and online propaganda. Before joining APL, Welton served for nearly a decade as an intelligence officer at the Defense Intelligence Agency and in the Army, including two operational tours in Iraq and a tour in South Korea. Welton received a PhD and MA from the University of Pennsylvania, an MA from Georgetown University, and a BA from Dartmouth College. The views expressed are his own.