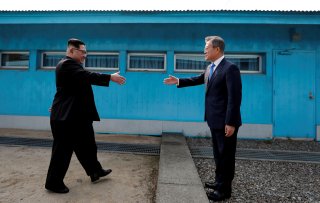 South Korea President Moon Jae-in is riding high domestically after his Democratic Party of Korea (DPK) won a landslide victory, capturing 180 of 300 seats, in the April 15 parliamentary election. The Moon government’s widely praised response to the coronavirus pandemic also elevated Moon’s approval rating to more than 60 percent, the first time in eighteen months and higher than any other presidents at the same point in their terms. Though Moon’s increased rating and the DPK victory did not come as a result of Moon’s improved relations with North Korea, there are signs that his administration is committed to resuming inter-Korean projects put on hold before the pandemic and to achieve a long-lasting legacy for Moon’s last two years in office.

In his special address in May, Moon wanted to work with North Korea on human security to cope with the coronavirus pandemic such as healthcare and quarantine cooperation. The Moon government also made it clear that Seoul would push forward with joint Korean ventures such as railway reconnection, tourism, and a fourth summit under Moon’s tenure independently of the United States-North Korea negotiations. North Korea’s abolition of the inter-Korean liaison office clouds the future of inter-Korean relations; however, in the aftermath Moon again signaled his will to forge ahead with the détente by proposing to send a secret envoy to North Korea. Moon’s goal thus is to pursue North-South cooperation permissible under the existing United Nations sanctions.

Still, the question remains whether Moon’s independent initiatives are welcomed in both Pyongyang and Washington. Since the collapse of the Hanoi summit, North Korea has ignored Moon’s outreach. In the United States, the Trump administration was not pleased with Moon’s push for tourism and has continued to maintain its demand for North Korea denuclearization before sanctions relief. Moon does not lack the will to preserve the détente but he seems to lack the options to advance his agenda given the ongoing stalemate in U.S.-North Korea relations.

Throughout the three inter-Korean summits in 2018, North Korea Chairman Kim Jong-un threw much of his weight behind Moon’s pitch for a “sanctions easing” agenda to the United States. However, the collapse of the Hanoi summit alerted Kim to the limit of what Moon could do with regard to sanctions relief; and consequently, Pyongyang has many times accused Moon of being “subservient” to the United States. After Hanoi, Kim, in his April 2019 Supreme People’s Assembly speech, asked Seoul to demonstrate its sincerity to improve inter-Korean relations by making a “bold decision” free of U.S. influence. Kim’s powerful sister, Kim Yo-jong, recently accused Moon of “pro-U.S. flunkeyism” after demolishing the liaison office for Moon’s failure to implement any of the 2018 agreements. In the absence of sanctions relief, North Korea will continue ignoring the South’s call for continued engagement.

Unable to persuade the United States to ease sanctions on North Korea, Moon did not want his détente efforts to go to waste and has sought to work around the U.S. and U.N. sanctions. Given North Korea’s perceived turn towards tourism to earn hard currency after Hanoi, especially after the country hosted its first-ever reality TV show the Amazing Race Vietnam in summer 2019, Moon has emphasized tourism as a way to signal to Pyongyang his willingness to continue the inter-Korean détente since late 2019. Moon argued that independent tours to the North would not violate sanctions. Moon’s tourism initiative is part of his bigger pitch for the two Koreas to co-host the 2032 Olympics and to jointly develop the border region.

Unfortunately for Moon, the pandemic has killed hopes to resume tourism because Pyongyang has closed its border. Considering North Korea’s poor healthcare infrastructure, the country will not reopen its border to tourists so long as Pyongyang cannot control the virus.  North Korea has also given Moon’s healthcare cooperation a cold shoulder for it continued to deny having any cases of Covid-19. Worse for Moon, Kim’s emphasis on boosting the country’s nuclear deterrence in the latest Central Military Commission meeting hurts many prospects of inter-Korean détente. The Moon government has tried to lift the “May 24 measures” sanctions imposed against the North after the Cheonan incident to signal continued engagement; however, domestic opposition and international sanctions may render such a move impossible. Without giving North Korea its desired sanctions relief, Moon has run out of options to reward Pyongyang for its restraint from provocations.

And a Hard Place

Moon tried to break the U.S.-North Korea impasse by brokering an impromptu meeting between Trump and Kim to advance his own agenda in June 2019, but the United States and North Korea still failed to narrow the differences over sanctions relief. The U.S. inflexibility is partially responsible for Moon not being able to implement his “peace economy” concept unveiled after the Hanoi summit to salvage the Korean détente. With two years left in Moon’s term, the Moon government is trying to work within the boundary of international sanctions by proposing tourism and railway reconnection with the North to leave a legacy for his tenure. However, the Trump administration does not want to lose control of Moon’s olive branch and has requested to be consulted on tourism resumption. Considering the U.S. general skepticism towards tourists to North Korea violating sanctions, it is highly unlikely that Washington would approve of Moon’s bid for inter-Korean tourism even if North Korea agrees to admit South Korean tourists.

Unfortunately, with the president distracted by the pandemic and his lack of appetite for another Trump-Kim summit, the odds of Washington lifting sanctions on North Korea will remain low till the rest of the year. The Moon government can signal its dismay at the U.S. inflexibility but Moon does not have any options to keep the United States invested in inter-Korean détente if Trump perceives no tangible gains in nuclear negotiations. The United States simply has a veto over Moon’s North Korea policy options via its imposed sanctions.

Moon embarked on an ambitious agenda for his presidency by playing the facilitating role between the United States and North Korea and he deserves the credit for improving the state of the U.S.-North Korea relations. However, regardless of Moon’s will to maintain the peninsular peace, his olive branch is not welcomed in both Washington and Pyongyang. Washington perceives Moon’s olive branch as undermining its nuclear track with North Korea while Pyongyang considers any olive branch short of significant sanctions relief unworthy of a response. Although his government is never tired of unveiling news peace initiatives, Moon is tragically seen as an impotent facilitator because he has few options to advance the peace and the denuclearization talks.

In the current context, China can emerge to assume South Korea’s role, but with U.S.-China relations deteriorating due to the pandemic, it is unlikely that Beijing can break the stalemate. The Korean Peninsula may be heading towards a cold peace for the rest of 2020, in which Kim refrains from testing his intercontinental ballistic missiles to keep the negotiation track with the United States open, Trump ignores the nuclear problem and declares North Korea’s moratorium his achievement for the presidential election, and Moon keeps the Korean détente alive by pursuing reconciliation within the framework of sanctions. Still, this does not change the fact that Moon has little say over what happens in the next several months despite his impatience to change the status quo.

Khang Vu is a doctoral student in the Political Science department at Boston College.