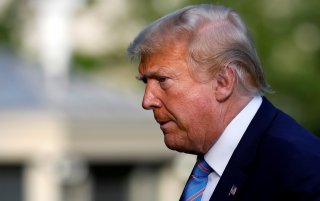 Yet again, North Korea has expressed its displeasure over inter-Korean relations. This week it destroyed a facility wherein inter-Korean meetings occurred. Ostensibly this was to protest leafletting by anti-North Korean groups in South Korea. These groups place leaflets and flashkeys into balloons to float into the North. But this seems like a disproportionate response. The North Korean government’s recent rhetoric has been so over-the-top that the South Korean government felt compelled to issue a warning against North Korean military action.

In President Donald Trump and South Korean President Moon Jae-in, Kim found interested partners. On North Korea, Moon is the most dovish president in the history of South Korea. Trump, too, in practice, is the most dovish U.S. president when it comes to North Korea. After threatening war in 2017, Trump swung toward negotiation. Multiple summits among the three leaders followed. Trump even walked around inside North Korea.

But the actual negotiations stalled almost from the start. Moon could do little on his own, a source of constant North Korean bitterness and vituperation. Moon the dove very much wants to reach out to the North. His government and coalition want inter-Korean exchanges, demilitarization along the border, the re-opening of a joint industrial zone in Kaesong, North Korea, and so on.

But North Korea is under wide-ranging sanctions at the global and national levels. Internationally, UN sanctions are in place because of the North’s missile and nuclear programs. There are further national sanctions against it from partners such as the United States and Japan. And there are South Korea’s own sanctions too. All of this has dramatically reduced Moon’s room to act. The dominant narrative on the left (Moon’s coalition) here is that sanctions destroyed the opportunity for peace which the Moon government opened up.

Moon could act unilaterally, but that would provoke major disruptions with the South’s partners, most obviously the United States. The U.S. alliance is very popular in South Korea; the domestic political cost to Moon of such a course would be very high.

Trump, too, sought to engage the North but far more haphazardly and sporadically. Trump’s primary interest seems to have been the photo-ops and symbolism. He has given no serious policy reorientation speech about North Korea nor committed much to the bureaucratic tussle necessary to move Congress and the U.S. foreign policy community in that direction. In the end, Trump seems to have lost interest in North Korea, and the North recently said the personal relationship between Trump and Kim is now irrelevant.

The facility demolition probably channels all the disappointment over this series of events. North Korea seemed to have a good hand in 2018 and two interested counter-parties. And yet two and a half years later, nothing has changed.

The core problem is, as it has long been, that neither side is making serious concessions while also demanding extraordinary counter-concessions. Trump went into his meetings with Kim demanding the complete, verifiable, irreversible disbarment of the Northern nuclear and missile program. The U.S. counter-concession, only vaguely article, would be some sort of rolling sanctions removal and development aid. Even before Trump’s first meeting with Kim two years ago this month, the analyst community said that it was extremely unlikely that he would achieve his desired result.

North Korea similarly offered little while demanding a lot. It offered, at the second summit, to shut down one aging nuclear reactor site in exchange for lifting sanctions. This too was a grossly disproportionate swap. The Trump team was so incensed by this request that it simply walked away from the table at Hanoi in 2018.

Moon, constrained legally by sanctions and politically by the wide public support in South Korea for the U.S. alliance, could do little but watch. Since the collapse of the Trump effort, North Korea has bullied him to act unilaterally. As he has not—likely due to the aforementioned constraints rather than personal choice—the North Koreans have been increasingly defaming him personally as a national traitor and toady to the Americans. The facility destruction was a part of that hate campaign.

Given the long history of enmity between the United States and North Korea, a big bang deal—nukes and missiles for sanctions, recognition, and a lot of money—was pretty unlikely. There is so little trust. Trump obviously carries some blame but his erratic, public relations-driven commitment to engagement should have been no surprise. Trump has shown similarly little concentration on high-profile domestic issues like health care and infrastructure. He is simply too scattershot to do any heavy lifting.

But Moon really should have known better. He has been thinking about North Korea for decades, devoting much of his career to détente. Yet at no point did he counsel an easier, more doable track of cumulative, smaller bargains: each building and expanding on previous deals in order to generate tangible, widening changes on the ground. If he, Trump, and Kim had lowered their sites and took the lower-hanging fruit, then they might now be in the midst of a rolling series of engagements tackling progressively tougher issues, and some normalization. Instead, almost nothing has changed.