What Happens If Détente with North Korea Fails? 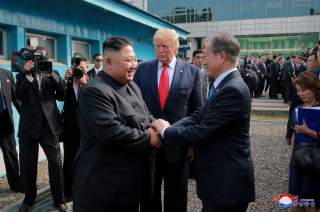 The language is humorous but portends a possible break in the peace process begun between the two men in early 2018. North Korea hawks have long suspected that the ideological and strategic gaps were too wide to bridge simply through summit diplomacy. Trump’s insistence that Kim was his friend always felt facile. The government of South Korean President Moon Jae-In similarly tried a ‘charm offensive.’ Moon has relentlessly promoted the idea that Kim is a different kind of North Korean leader, one open to bargains, deals, and better inter-Korean relations. Between Moon and Trump, they have met six times with Kim in two years. For a brief moment, dovish interpretations that a rapprochement with North Korea could be achieved by a leadership willing to breakthrough obsolete bureaucratic and ideological rigidities seemed possible.

Two years on though, this increasingly seems unlikely. Neither side has been willing to make serious concessions. North Korea wants the rollback of the tough multilateral sanctions imposed on it by the United Nations. But the only concession it offered was to close its aging nuclear facility at Yongbyon. Its nuclear program is so much greater than that now, that this is not nearly enough.

The Americans similarly offered very little. Trump’s government has repeatedly insisted on ‘complete, verifiable, irreversible disarmament.’ This was always fantastical thinking, made worse by the fact that Trump never offered anything remotely commensurate from the American side for such a huge North Korean concession. Throughout the process, I and other analysts suggested cumulative, small deals in the place of Trump and Moon’s insistence on a one-shot, big-bang deal to change everything at a stroke. Baby-step deals were never tried, and now détente looks shakier than ever. If North Korea follows through on its ‘Christmas gift’ threat and launches a missile (my guess), relations will likely slide back to the old status quo of containment, deterrence, sanction, and isolation.

But this time, things will be worse. North Korea hawks will look back at this moment in a year or so and argue that it proves that North Korea does not want a changed relationship. Elsewhere in these pages, I have argued that the present is a unique negotiating opportunity. North Korea’s primary opponents – South Korea and the United States – are currently governed by presidents – Moon and Trump respectively - more dovish and pro-engagement regarding North Korea than any of their predecessors. Further, Moon and Trump are in power simultaneously. Two overlapping, dovish presidents makes the present a genuinely unique chance for the North to pull a generous deal out of Seoul and Washington. Instead, North Korea has offered little, freezing out South Korea almost entirely and playing games with the Trump administration’s negotiators.

This uniquely dovish Moon-Trump constellation met nonetheless by continuing North Korean obstinance will fire a coming hawkish backlash. Trump is a unique president. No other U.S. president met the North Korean leader; no other went to North Korea; no other attended three summits (not just one), extending North Korea the legitimacy gains of direct interaction with a U.S. president. Trump said he was ‘in love’ with his ‘friend’ Kim Jong Un. Trump has endured heavy criticism – ‘photo-op diplomacy,’ ‘drive-by diplomacy’ - from the American foreign policy establishment for his outreach. Any successor to Trump – Democrat or Republican – will almost certainly be tougher on the North.

Moon too is unique. His liberal presidential predecessors – 1998-2007 – also reached out to North Korea and sought to end the peninsular cold war through reconciliation. But none went as far as Moon. The backlash against Moon’s detente has also been pretty sharp. He is routinely accused of appeasement and naivete by South Korean conservatives, and conspiracy theories about Moon as a traitor are widespread on the far right here.

Hawks then will look at these extraordinary, overlapping, and rejected dovish efforts and conclude that North Korea will never come to reasonable terms. Moon and Trump were offering far more than North Korea ever could hope for in the past, and still, the North would give up nothing. Hence talking to Pyongyang is pointless, just giving it time to build more missiles and warheads.

The window for Moon and Trump to pull off a deal and forestall this critique is still open. But it is closing. Moon is facing legislative elections with a low approval rating in April and then will be lame-ducked by 2021. Trump is being impeached and faces re-election. If Trump survives these challenges without a North Korean deal, he will likely conclude that negotiations with Pyongyang are pointless and move on. Indeed, he already appears to have done so since his surprise visit to the demilitarized zone this summer.

So I reckon that Moon and Trump have maybe six months or a year at most to pull this off. If the process is still frozen then, it is likely over. At that point, hawks will re-emerge to claim that the 2018-2020 window of détente was spurned by North Korea, or used to demand exorbitant concessions – summits, sanctions rollback – for almost nothing. The North, they will say correctly, would not even give up inter-Korean family reunions – low cost, low threat, easy to manipulate – to facilitate détente. Pyongyang has proved that it operates in bad faith, and therefore we have little choice but to consider tougher options – a full pursuit of their illicit monies in Chinese and Russian banks, a blockade or quarantine to prevent proliferation, a ‘bloody nose’ strike, and so on.

This reading is coming soon. If détente fails, the Overton window of policy options on North Korea will shift noticeably to the right, and North Korean 2018-2020 recalcitrance will be the justification.