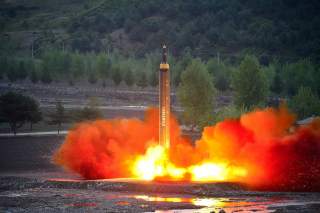 North Korea has issued yet another curious ultimatum in that nation's long history of oblique threats and hazy deadlines. Now, the U.S. must deliver serious movement on the peace process begun last year, or the North will give the U.S. an unwanted ‘Christmas gift.’

No one knows if this is real or not. The North has a long history of gimmicks and crying wolf. And certainly, the North’s ‘Christmas gift’ would not seriously jeopardize peninsular security or ignite conflict. The North knows full well that it would lose any shooting war, and U.S. President Donald Trump was quick to remind Pyongyang of that.

If the unwanted gift follows North Korean form over past decades, it would probably be either a missile or nuclear test, or an inter-Korean border provocation.

The latter seems unlikely. South Korean President Moon Jae-In has bent over backward to solicit North Korea and pull the hesitant South Korean public with him on detente. A North Korean provocation in the mold of its previous hijinks would end détente immediately, and without a cooperative South Korea, a breakthrough with the Americans is all but impossible. Also, the North has basically spurned South Korea in this two-year process, focusing most of its attention on the Americans. So tangling with South Korea now would not help much.

A missile or nuclear test seems more likely, as that would provoke U.S. attention immediately. North Korea has no formal deal with the U.S. in the peace process, so it would not be legally violating anything. But there is a vague ‘gentleman’s agreement’ with Trump that North Korea will not test long-range missiles while the peace process is ongoing. My guess is that such a test would be the ‘gift.’

A nuclear test would be a huge provocation and almost certainly end détente with the U.S. It would attract huge media attention. The Chinese would feel compelled to criticize the North. The United Nations Security Council might step in. The U.S. Congress – both Republicans and Democrats – would react sharply. Reliable North Korea hawks like Senators Lindsey Graham, Tom Cotton, or Marco Rubio would start talking about military action again. This is a bridge too far if the North Korean goal is to pressure Trump back to negotiations.

A long-range missile test is less provocative but hits Trump where it hurts. It violates the gentleman’s agreement and so embarrasses Trump but would appear less terrifying to the general public than a nuclear detonation.

This is speculation of course. The North might do other things – take more Westerners traveling in North Korea hostage, launch its long-rumored submarine, hack a western institution, and so on. It has options.

The question then is what to do. On one hand, there is a strong temptation to simply ride out the deadline. Neither the U.S. nor South Korea wants North Korea to think it can blackmail them. North Korean nuclear and missile testing violate Security Council resolutions. Technically, such actions would violate international law. North Korea, as a member of the UN, is supposed to uphold these resolutions. Catering to North Korean threats puts the U.S. and South Korea in the awkward position of placating the North in order to do something it is supposed to do anyway. This will almost certainly be the hawkish line, and so far, the White House appears, understandably, disinclined to respond to North Korean year-end threats.

On the other hand, the clock is ticking for a deal between North Korea and the U.S. The present is a unique moment for the North to make a serious offer. Both Trump and Moon are far more dovish on North Korea than any of their predecessors. And that they are both president of their respective countries at the same time opens a unique chance for the North to strike a deal with both its major opponents.

Yet the window of opportunity of these simultaneous dovish presidencies is closing. Trump is being impeached and faces re-election next year. His attention is elsewhere. He will come back to the table if the North puts forward a serious concession but likely not without that. Trump went on three fishing expedition summits with the North Korean leader Kim Jong Un. He absorbed tough criticism for two years that he was engaging in substance-free, photo-op diplomacy, giving away legitimacy to Kim in exchange for nothing. Trump will almost certainly not countenance that kind of backlash a fourth time, and in election season, without a far more robust and concrete offer. This is understandable. Trump can argue he made a good faith effort – three summits – and Kim gave up nothing, so there is no reason to bargain again until the North offers something.

Moon too is in a tight spot. He faces legislative elections in five months, and his approval rating is only around 40%. His détente has yielded much symbolism, but little movement. Conservatives are chomping at the bit to rein him in, claiming that he is groveling before Pyongyang for nothing. If the right should win in April next year, Moon’s ability to reach out to Kim will be severely constrained.

So there is a pragmatic argument to try one more time. The stars – the doves of Moon and Trump – are still briefly aligned. If they can bring back a serious offer from Kim, these presidents could probably still sell a deal to their skeptical publics. It would be a shame if this moment were wasted on a typical North Korean gimmicky threat invoking Christmas to create artificial tension.