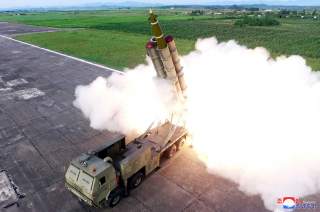 This week’s most recent talks between the US and North Korea have failed again. When U.S. President Donald Trump met North Korean supreme leader Kim Jong Un in Hanoi earlier this year, Trump walked out abruptly. This time it appears the North Koreans did. Perhaps it was turnabout as the North Koreans were apparently surprised and embarrassed that Hanoi collapsed so badly. Certainly the North Korean statement that these newest talks were ‘sickening’ and their refusal to return to another suggests the meeting went badly.

This was not that difficult to foresee. The U.S. keeps approaching negotiations with the North in search of a big-bang, all-or-nothing deal. But North Korea has repeatedly said that there is not enough trust between it and the U.S. for a mega-deal which would dramatically reduce its nuclear and missile arsenal, and that the U.S. offer of sanctions relief for large North Korean cuts is not enough. The North Koreans seem to want a smaller starter deal, or at least to avoid one final, end-all-be-all resolution.

The focus on a one-shot agreement seems to flow from Trump’s personal hang-up with winning a Nobel Peace Prize. His opening to North Korea is the argument he makes most for the prize. But to actually justify it, Trump would have to bring home a serious breakthrough, a deal which sustainably shifts the peninsula away from its long, heavily militarized stalemate. This prize-seeking, in turn, has provoked blowback from U.S. analyst community and media that Trump would give away a lot in order to secure any deal he could get. That deal could then be pitched as a foreign policy success for his re-election campaign and the Nobel Committee.

This blowback has constrained how much Trump can offer the North. In Hanoi, he complained that the media and expert community would have criticized him if he had struck a soft deal with Kim. Certainly, Democrats in 2020 would use a weak deal with Kim against Trump, and given the president’s harsh criticism of former President Barack Obama’s Iran deal, hypocrisy would loom large.

In short, Trump appears to want to offer a big, somewhat generous, Nobel Prize-earning offer to Kim, but he cannot. U.S. domestic optics are just too punishing. This brought down the Hanoi summit and appears, if the North Koreans are to be believed, to have brought down last weekend’s talks too.

The question, yet again then, is how to move forward. Given that North Korea does not want an all-or-nothing deal, there is little alternative but to move more slowly, regardless of extraneous concerns like the 2020 election or Nobel Prize committee deliberations. I have long argued in these pages that small, manageable U.S.-North Korean deals, cumulating over time, are the best way forward. The collapse of this weekend’s talks, on top of the failure of all the high-profile, empty symbolism summitry of the last eighteen months, once again strongly suggests this middling approach.

The reasons for big bang’s failure are not that difficult to figure out. The strategic and ideological gaps between the U.S. and North Korea are enormous. North Korea explicitly built nuclear weapons to deter the United States. The U.S. has long supported South Korea’s sovereign claim to rule the peninsula. The U.S. has long led a coalition to contain, sanction, isolate, and deter the North. Given the North’s appalling human rights record, there is little global sympathy for the North; most countries, even China and Russia, would be happy to see the Kim monarchy pushed out and replaced with more moderate leaders.

Trump has tried to reverse this large legacy. But he has done so frantically and haphazardly at best, and his credibility is low. Just two years ago, he was speaking of ‘fire and fury’ and war. Then suddenly he called Kim his friend. Such erratic swings discourage confidence. North Korea, like many of Trump’s counter-parties over the years, is wary of being burned in a deal. This really should not be surprising to anyone who has followed North Korea or its relationship with the U.S.

Given this long, tricky past, the obvious way to move forward is small deals generating confidence to make bigger deals next. The deals will be valuable in themselves, but the confidence-building of bargains made/bargains kept will be almost important. A long-standing problem for both sides is low trust and credibility. Baby-step deals that demonstrate trust in action should open doors to bigger more expansive swaps. Given the many issues between the U.S. and North Korea, it should not be that difficult to find some small issues of value to both sides to swap.

For example, nuclear safety in North Korea has long been an outside concern. A Chernobyl-style incident in North Korea would be a regional disaster, and it is not hard to imagine that nuclear safety protocols are weak in the North, just as they were in the Soviet Union. Nuclear safety discussions also keep the U.S.-North Korean talks near the nuclear program but do not touch reductions or cuts the North Koreans are simply unwilling to make now.

The usual argument against this is that it is low-ball thinking: Trump and South Korean President Moon Jae-In are dynamic leaders looking for historic breakthroughs and a revolution on the peninsula. This is exciting, heady rhetoric but, in reality, it forgoes actual progress for big talk. Consider how much further along we might be with the North if we had made – and kept – a series of micro-deals in the last few years, one building on another. We would have a record of real successes – bargains made/bargains kept - and growing mutual confidence for greater mutual concessions.

But instead, we have succumbed to empty rhetoric, like Moon’s ‘peace economy’ with North Korea, or empty symbolism like Trump’s steps across the demilitarized zone, with little actual progress. Let’s stop hankering to cut the North Korean gordian know with one made-for-TV stroke and get to the real business of doable swaps.