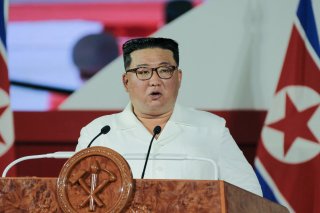 House Speaker Nancy Pelosi’s visit to Taiwan this week has set off anger in China and now, North Korea has also weighed in.

According to Reuters, a spokesperson for the North Korean Foreign Ministry announced that they “vehemently denounce” Pelosi’s visit and “fully support” China.

The news site 38 North published the original statement in full.

“The current situation clearly shows that the impudent interference of the U.S. in internal affairs of other countries and its intentional political and military provocations are, indeed, the root cause of harassed peace and security in the region,” the statement said.

“Taiwan is an inseparable part of China and the issue of Taiwan pertains to the internal affairs of China… It is the due right of a sovereign state to take countermeasures against the moves of the outside forces openly interfering in its internal affairs and destroying its territorial integrity.”

“We vehemently denounce any external force’s interference in the issue of Taiwan and fully support the Chinese government's just stand to resolutely defend the sovereignty of the country and territorial integrity... The US scheme to disturb the growth and development of China and its efforts for accomplishing the cause of reunification is bound to go bankrupt.”

As part of her tour of Asia, Pelosi landed in Taiwan on Tuesday. She is set to meet with President Tsai Ing-wen and legislators and was also set to receive an award from the president of that country.

The White House is said to have opposed Pelosi’s visit. China, meanwhile, announced that it was banning shipments of more than 2,000 products from about 100 food exporters. In addition, Motorola, which is owned by Chinese company Lenovo, abruptly announced that it was canceling the unveiling of two new smartphones, including a new version of the Motorola RAZR.

In an op-ed published in the Washington Post before she landed, Pelosi defended the visit.

“We must stand by Taiwan, which is an island of resilience,” Pelosi wrote in the Post piece. “Taiwan is a leader in governance: currently, in addressing the Covid-19 pandemic and championing environmental conservation and climate action. It is a leader in peace, security, and economic dynamism: with an entrepreneurial spirit, culture of innovation, and technological prowess that are envies of the world.”

In defending her decision to go to Taiwan, Pelosi also cited the situation in Ukraine

“Indeed, we take this trip at a time when the world faces a choice between autocracy and democracy. As Russia wages its premeditated, illegal war against Ukraine, killing thousands of innocents—even children—it is essential that America and our allies make clear that we never give in to autocrats,” she said.