Biden Can Make Progress on North Korea, but Not by Following the Same Old Paths 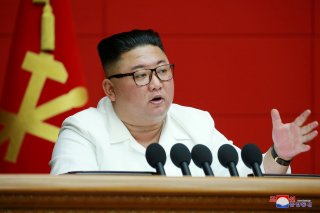 The Biden campaign has presented itself as, once elected, a restorationist administration that will bring America back to the alleged balance and good sense of pre-Trump times. This may be especially true in the area of foreign policy, where Trump has been criticized relentlessly for undermining America’s status abroad and for coddling dictators, from Putin to Erdogan to Mohammad Bin Salman.

Trump’s overtures to Kim Jong-un, including the two leaders’ summit meetings in 2018-19, have been singled out by the current administration’s critics for their lack of substance and counter-productive nature. Once in power, a Biden administration is bound to take a harder line toward North Korea, at least initially, and emphasize economic sanctions and diplomatic pressure over any economic or diplomatic incentives to convince North Korea to give up its nuclear weapons: “sticks” over “carrots.”

Veterans of the Obama administration such as former National Security Advisor Susan Rice are likely to be on the Biden foreign policy team, perhaps in prominent roles, reinforcing Biden’s probable instincts to return to a more pressure-focused policy. But it can’t be said that the Obama policy toward North Korea was a success: although North Korea’s nuclear weapons program accelerated under Trump, it began to take off during the second Obama term. At this point, the North Korean nuclear genie is out of the bottle and the clock cannot be turned back.

The Iran nuclear agreement, which Trump abrogated and Biden has praised, is not a useful comparison. Any productive policy toward Korea will have to accept the reality of a nuclear North Korea for some time to come and also acknowledge the changing attitudes in South Korea, where the Moon administration continues to push strongly for engagement with the North. If the Biden Administration takes a hardline approach to North Korea, it will be difficult to get buy-in from South Korea, not to mention China, as U.S.-China relations are likely to continue their downward slide whatever the results of the November 3rd election. The Korean peninsula is in some ways at a very different place than it was when Joe Biden was Vice President.

A more successful example of a Democratic president dealing with North Korea, and a more useful point of reference for a Biden administration, is Bill Clinton. Under Clinton, the U.S. and North Korea reached a landmark nuclear agreement in October 1994 and had moved substantially toward diplomatic normalization by the fall of 2000. The 1994 framework agreement was far from perfect, but it managed to contain North Korea’s plutonium-based nuclear program for some nine years. This nuclear freeze was not an end in itself, rather it was means to an end: that of ending hostility on the Korean peninsula and between the United States and North Korea, thereby enabling peace and prosperity in the Northeast Asian region.

Trump seems to have understood, perhaps more by instinct than analysis, that a breakthrough on the Korean peninsula requires moving beyond the nuclear issue to address directly the conditions of conflict that gave rise to it, and that these issues have to be addressed from the highest levels of leadership. A creative and competent Biden administration can build on the successes of the past to help establish a lasting Korean peace.

Charles K. Armstrong is The Korea Foundation Professor of Korean Studies in the Social Sciences at Columbia University, where he served as Director of the Center for Korean Research and Acting Director of the Weatherhead East Asian Institute (WEAI). He is the author, editor, or co-editor of five books on modern Korean history and politics, and his newest book, soon to be released, is A History of Modern East Asia, 1800—present.