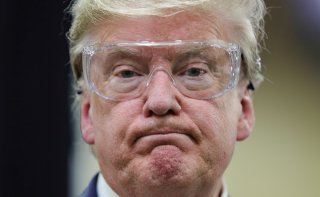 Bob Woodward’s most recent account of the Trump White House, entitled “Rage,” isn’t even on the shelves yet. But the legendary reporter and author has already busted the news cycle apart at the seams. Most of the coverage about the book has centered on Trump downplaying the COVID-19 pandemic in public while at the same time describing the disease to Woodward in private as “deadly stuff." Watching CNN and MSNBC in the hour after some of the excerpts were released, you could be pardoned for thinking the White House was on fire and Trump, already 7 points behind Democratic presidential nominee Joe Biden, threw away his re-election.

But Woodward’s book doesn’t just focus on the health crisis. The veteran Washington Post journalist also delves into some aspects of Trump’s foreign policy over the previous two years, with former senior national security advisers and the president himself providing some behind-the-scenes flavor to the reader. Trump’s relationship with North Korean leader Kim Jong-un comes in for special consideration—and what we learn, at least from the juicy nuggets fed to the public, is that the president was enchanted with his friend in Pyongyang. We also find out that, like many of us during the “fire and fury” days, even Trump’s own cabinet members were extremely concerned about the insults getting out of control.

-Trump didn’t trust the CIA on North Korea—or any of his national security advisers for that matter: Trump told Woodward that the CIA had “no idea” how to manage North Korea. Why he would name-drop the CIA is a bit puzzling; the agency, after all, simply provides intelligence products to the National Security Council about the North’s technical weapons capability as well as the strategic intentions of its leadership. The spooks at Langley aren’t responsible for offering policy advice or recommending what the U.S. negotiating position should be. But one can surmise that Trump is probably using the CIA as a term to encompass his entire national security team, which wasn’t exactly thrilled with the idea of a one-on-one meeting with Kim and was highly skeptical that summitry would amount to anything productive.

-Trump was unprepared when the summitry actually occurred: According to the Washington Post exclusive report on Woodward’s book, Trump largely saw the North Korean nuclear problem as a difficult real-estate deal. "Trump told Woodward he evaluates Kim and his nuclear arsenal like a real estate target: “It’s really like, you know, somebody that’s in love with a house and they just can’t sell it.” The theory of the case, in Trump’s frame of mind, was that Kim’s nuclear weapons deterrent was something Pyongyang would eventually trade away if the U.S. offered the right mixture of economic sanctions relief, political goodies, and security assurances in return. Yet it turns out eliminating the best source of negotiating leverage the North as ever had and pressuring the Kim dynasty to hand over the keys to its nuclear kingdom is not at all like convincing an owner to sell her beautiful house. If Trump bothered to read the assessment of his own intelligence community, he could have flown to Singapore and Hanoi with a more realistic idea of what was achievable in those negotiations.

-Kim knew what he was doing with those letters: Trump and Kim have met one another three times, the last of which was a spur-of-the-moment handshake along the Demilitarized Zone in June 2019. Most of the communication between the two has come in the form of letters. Woodward got his hands on 27 of them. The letters in and of themselves don’t tell us much—in one, sent to the White House after the Singapore Summit, Kim wrote to Trump that he was “really, really offended” that U.S.-South Korea military drills were continuing. What they do show, however, is Kim’s clear intent: butter up Trump by heaping praise on him; using terms like “your excellency” to enhance his self-importance; persuade Trump of the uniqueness of their personal relationship; and feed Trump’s already outsized ego in the hope he would put something on the table he shouldn’t have. As Woodward would write, CIA analysts "marveled at the skill someone brought to finding the exact mixture of flattery while appealing to Trump's sense of grandiosity and being center stage in history.”

The excerpts from “Rage” will inevitably produce a howl of righteous indignation on the pages of the Atlantic and on the Twittersphere about how Donald Trump was never up to the task of being commander in chief. Others will use them as proof of Trump’s inability to comprehend when he is being conned or duped. Robert Manning, a former senior official in the State Department’s Policy Planning Staff who is now with the Atlantic Council, tweeted that the sections on North Korea don’t really tell us anything we didn’t already know. "Nice to have documented,” Manning wrote. "But c'mon we knew this. Narcissism uber alles. To Trump, must-see RealityTV of the Summit was enough. A deal would have been gravy.” Fair enough.

But if Trump did make a mistake during his summitry with Kim Jong-un, it wasn’t his decision to meet with the North Korean leader, per se. The problem (or rather, problems) was that Trump was totally unprepared for the summits when they finally happened, went into them with a starry-eyed idealism about making history, and strongly believed he could schmooze Kim into giving up the one thing—a nuclear weapons deterrent—he was likely never prepared to give up in the first place.