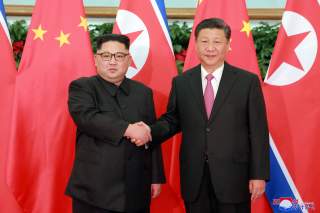 Six months after the Singapore Summit, the United States and North Korea have made no progress on denuclearization. Indeed, Pyongyang refuses to meet with U.S. Special Envoy Stephen Biegun. It’s not so much that the process has been derailed, it simply never left the station.

Despite, or counter-intuitively because of, North Korea not living up to its summit commitments, President Trump believes another summit “is likely to be productive.” That’s worrisome because Trump may be willing to offer additional unrequited concessions, just as he did in Singapore.

Trump’s decision to cancel allied military exercises on the peninsula has been the gift that keeps on giving…for North Korea. Washington and Seoul have canceled eight exercises—risking degradation of allied defense capabilities—while Pyongyang took no reciprocal measures. Meanwhile, the Trump administration has fallen away from its maximum pressure policy.

But the primary fault lies, as always, with North Korea’s refusal to comply with UN resolutions requiring it to denuclearize. In 2019, America will continue attempts at engagement, but Biegun warns that “the window of opportunity is closing.” On its part, Pyongyang has warned of a resumption of “exchanges of fire” if the process collapses.

If Pyongyang were to engage in blatantly bad-faith behavior—such as a nuclear test, missile flight, or openly declaring an end to negotiations—the United States would be faced with a clear policy decision point of preventive attack, more pressure, or maintaining a long-term containment policy.

The Trump administration will also be challenged to decide, in the absence of a dramatic provocation, when it has gone too far down the rabbit hole of diplomacy. As talks drag on with no progress, the clock is ticking on the Trump administration’s earlier admonitions that the North Korean nuclear threat to the American homeland was getting dangerously close.

In June, Trump retrospectively stated, “We were very close to going to war. You could have lost 30 million people, 50 million people.” Trump warned earlier this year that if diplomacy did not work out, “we’ll have to go to Phase Two [which] may be a very rough thing. Maybe very, very unfortunate for the world.”

Strains with ally South Korea will also increase as President Moon continues his advocacy for benefits, including sanctions reduction, for Pyongyang even before meaningful denuclearization steps.

The Korean Peninsula has been quiet of late…but that will change in 2019.