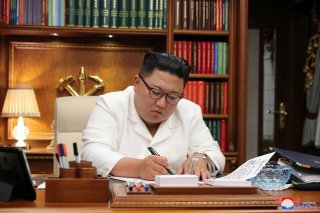 Nine years ago came a moment of potential instability to North Korea, the bizarrely totalitarian and infamously nicknamed Hermit Kingdom. After the demise of Enver Hoxha’s Albania the Democratic People’s Republic of Korea was without question the strangest state on earth.

The latter is the only land of Marxist-Leninism without a single public statue or picture of either Marx or Lenin. Or any other Communist notable. Most bizarrely, the DPRK hosted the world’s only communist monarchy and on December 17, 2011, power passed from father to son for the second time. The process wasn’t quite as automatic as traditional monarchies—it took five months before Kim Jong-un fils gained the title of First Secretary of the Korean Workers’ Party, signaling his political preeminence. However, the twenty-seven-year-old—he turned twenty-eight a few weeks later—steadily consolidated power.

Tagged by many as a likely frontman for his influential elders, Kim put a babyface to ruthless, emotionless rule. The first political titan to go was Ri Yong-ho, the chief of the Korean People’s Army General Staff, a Politburo member, and much more. Relieved “for his illness,” Ri was never heard from again. Most brutal, perhaps, was Kim’s disposal of his uncle, Jang Song-thaek, one of the “mentors” tasked by departed “Dear Leader” Kim Jong-il with guiding the younger Kim forward. Almost exactly two years after taking charge, the latter had his uncle publicly arrested, charged with a plethora of grievous crimes, and executed.

Kim demonstrated that he would not be trifled with. Hundreds of senior officials have been executed. Many more have been demoted, shifted, retired, reeducated, and sometimes recalled. Although he demonstrated his willingness to do whatever is necessary to stay in power, the constant personnel churning may reflect fear as well as control.

Certainly, his policies have not been without internal controversy. His willingness to negotiate with President Donald Trump, and to do so over nuclear weapons, the military’s piece de resistance, likely faced opposition within the security apparatus and armed forces. Modest economic reforms, seen as destabilizing by his Kim’s father and grandfather, also might have stirred concern in similar quarters.

At the same time, his failure to make good on his public promises of economic growth and a better life may have created disappointment and resentment among the nomenklatura. Some might blame him both for the breakdown in U.S.-DPRK talks, as well as halt of domestic reforms, which ended as international sanctions were tightened in 2015 and 2016. Indeed, serious economic retrogression has been evident.

Of course, there is no safety net for anyone challenging the Supreme Leader. However, fear of becoming his next victim could spur an act or conspiracy of desperation. Moreover, public dissatisfaction under repressive regimes typically increases most amid rising expectations, which he helped stoke with his brief commitment to the economy first.

China also may not have forgiven him years of ostentatious contempt displayed toward the DPRK’s bigger neighbor through rhetoric and actions. For instance, in April 2017 the North staged a missile test the day before Presidents Donald Trump and Xi Jinping met for the first time. The execution of Jang, his government’s primary interlocutor with Beijing who was charged with corruptly transferring resources to an unnamed third country, was another direct strike against the Xi government.

After Kim and Trump arranged their summit, Xi hurriedly met with Kim. Beijing likely was afraid of being sidelined by a U.S.-DPRK deal. China appears to have relaxed sanctions enforcement—though the North’s national quarantine policy against the coronavirus did more to isolate the country than outside economic restrictions—and provided food and energy to help keep the regime afloat. With U.S.-DPRK relations bad and likely to get worse under a Biden administration, Beijing possesses extra leverage for possible use.

Questions about North Korea’s policymaking process remain. Its system consists of a one-man show, though Kim appears to have decentralized the implementation—if not the making—of decisions. That remains difficult, however, since the won still stops with someone ready and able to execute those in disfavor. Although he does not appear to have done so in response to simple policy failures—rumors about the demise of his nuclear policy team after the debacle in Hanoi proved false—displeasing the “chairman” won’t be good for one’s career.

Which may have led to serious problems. Fear of telling political leaders bad news is not restricted to North Korea, but the potential downsides are greater. Kim apparently kept close control over any decisions involving nuclear weapons and some analysts speculated that the Hanoi bust reflected the failure of fearful North Korean negotiators to accurately brief him on Washington’s stance.

In June Kim’s sister, Kim Yo-jong, made splenetic attacks on South Korea, followed by the destruction of the Kaesong joint liaison office constructed by Seoul. Then the rhetorical fusillade ended, Kim soeur disappeared from public view, and the Supreme Leader seemed to take a more conciliatory position on succeeding controversies, especially the killing of the South Korean official shot after entering DPRK waters under mysterious circumstances. Theories abound as to Pyongyang’s intentions: The Kims were playing good-cop, bad-cop; Kim Yo-jong got out in front of her brother and was yanked back; she acted with authority and achieved her purpose, pushing Seoul to move against protestors sending leaflets to North Korea. Whatever it was, the North obviously failed to communicate a clear message.

An unfortunate aspect of Pyongyang’s self-enforced isolation this year is extirpating any hint of liberalization. After taking over the Supreme Leader tightened border controls, but they became much tougher this year, reportedly backed by a shoot-to-kill order tied to the coronavirus.

Moreover, Kim Jong-un continued to demonstrate that he is no liberal and is unlikely to usher in an era of perestroika and glasnost, as some observers had hoped, given his time spent in school in Switzerland. Rather like those who imagined that KGB Chief Yuri Andropov, a fan of jazz and scotch, might prove to be a closet liberal when he took over as Communist Party General Secretary in 1982. Kim may have enjoyed watching the Chicago Bulls play basketball, but he doesn’t want his country to turn into the one which created the Bulls.

The regime also has increasingly targeted the threat posed by cultural exposure. The authorities and people long have played a cat-and-mouse game over access to South Korean shows and music. The campaign against access to foreign information, reported NK News, “continued this year, when the DPRK passed the Law on the Rejection of Reactionary Idea and Culture, which reportedly led to new arrests of young people who watched South Korean dramas and listened to foreign broadcasts.”

Equally significant is the erosion of economic freedom. A recent amendment to the Law on Enterprises restricted autonomy for state firms, ordering reduced resource usage, among other provisions. Further, the regime moved to crack down on the use of foreign currency, prohibit electronic payments, set de facto price controls for imported goods, and increase reliance on banks, which are not trusted given the lack of protection against government confiscation of private assets. Most likely, these moves are intended to strengthen state control and increase state resources amid growing economic hardship. The veritable collapse of state administration in the great famine of the 1990s sparked an explosion of private economic activity. Presumably, Kim does not want another such round.

In addition, his government may have recognized that economic liberty risks creating newer and more powerful currents that will challenge political controls. More restrictive economic policies are unlikely to improve people’s standards of living but will limit the potential for political upheaval.

Nevertheless, Kim made a public commitment to improve his people’s standard of living. His recent tearful confession as to his failure in this regard—even while blaming hostile foreign forces—was a stunning departure from the performance of his predecessors. This desire for sanctions relief appears serious and continuing, providing the incoming Biden administration with leverage.

Kim’s surprisingly effective performance on the diplomatic stage is another potential draw to negotiation, even of a more serious variety than the Trump-Kim show. In a couple of years, Kim managed to meet leaders of the world’s three most important geopolitical powers as well as the head of his nation’s chief rival multiple times. If Washington indicates its willingness to continue this process— even if only accompanied by serious nuclear negotiations—then Pyongyang might forgo a widely expected provocation to win the Biden administration’s attention.

Also uncertain is Kim’s health. The embarrassing media frenzy over his absence from public view earlier this year dissipated after his reemergence, but speculation remained that he might be suffering serious if not debilitating health problems. His public appearances were at a record low when the regime might have used his presence to present an image of stability and continuity. An alternative explanation is that he was doing his best to limit possible exposure to the coronavirus, despite the claim that there are no cases in North Korea.

Despite the manifold uncertainties regarding the DPRK—impact of the coronavirus pandemic, status of the regime, vulnerability of the economy, the health of Kim Jong-un—it has become better armed, more economically advanced, and a stronger international player since Kim took over from his father. Moreover, he seems interested in a deal with the United States, though whether he is willing to make sufficient nuclear concessions to gain the economic opening that he craves is impossible to know. The objective of the Obama administration should be to answer that question.