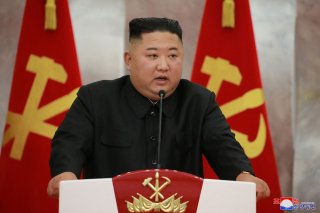 Despite three summit meetings with Kim Jung-un which gave the young dictator an unprecedented boost in legitimacy, Trump would be leaving North Korea where he found it: a rogue regime armed with a nuclear arsenal that could target the continental United States, and adamant about keeping it. The difference is that President Biden would have even fewer options than President Trump.

Trump failed to denuclearize North Korea because he was unable to give Kim what he desperately wants: regime security. So says Kim’s friends, including Vladimir Putin of Russia and Xi Jinping of China.

The problem is that, as far as Kim and his friends are concerned, the only way to “guarantee” North Korea’s security is by dissolving the U.S.-South Korea military alliance, pulling U.S. troops from the Korean peninsula, and withdrawing the “nuclear umbrella“ that the U.S. provides to South Korea. That is what Kim means by “denuclearization of the Korean peninsula.”

Even though that may go a long way towards guaranteeing North Korea’s security, it will surely undermine South Korea’s. As such, this is one option that President Biden, or any U.S. president, cannot exercise.

What are President Biden’s options, then? One is to ratchet up economic and military pressure on North Korea until Kim realizes that retaining nuclear weapons is more of a threat to his survival than giving them up. The other is to return to President Obama’s policy of “strategic patience.” However, given that North Korea will test and provoke a Biden administration from the beginning while continuing to upgrade its nuclear arsenal, this is not really an option.

As if things are not difficult enough, even if President Biden decides to pursue a policy of maximum pressure on North Korea, it will likely face resistance from its ally, South Korea. The current Moon Jae-In administration of South Korea is determined to improve relations with North Korea seemingly at all costs. In fact, President Moon has been the biggest cheerleader for the Trump-Kim bromance.

There are five potential areas of conflict between the United States and South Korea. First, Biden, who is openly critical of Kim’s belligerence as well as human rights abuses, is unlikely to engage Kim in a dialogue without preconditions. South Korea’s Moon, on the other hand, will continually urge Biden to do so.

Second, Biden, who supports a tougher sanctions regime against North Korea, will likely clash with Moon, who has been campaigning to lift sanctions as a means to lure Kim to the negotiating table.

Third, Biden will be ready to resume full-scale joint military exercises that were scaled down or suspended by Trump, but Moon will likely oppose them, arguing that they will raise tensions on the Korean peninsula.

Fourth, Biden will try to bolster U.S. military presence on the Korean peninsula. Moon will oppose such efforts for the same reason that he will oppose increased joint military exercises.

Maximum pressure has been the only option from the beginning of the so-called “North Korean nuclear crisis” in the early 1990s. However, successive U.S. administrations have refused to take the one option that has any chance of denuclearizing North Korea. It is possible that President Biden will forgo this option too, especially if the South Korean government refuses to go along with it.