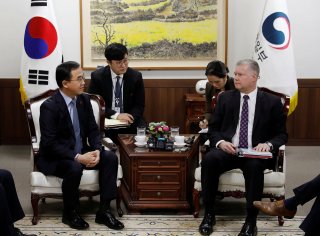 The job of Unification Minister is one of the most difficult and thankless tasks in the South Korean government. It doesn’t matter who holds the position at any given time, how dedicated the individual is to breaking ground with North Korea, or how much experience he or she has in the field of diplomacy—whoever comes into the job immediately confronts a steep mountain of challenges. Very often, the person who entered the role with such enthusiasm leaves disappointed. If you don’t believe me, just ask the latest victim, Kim Yeon-chul, who resigned last June.

Lee In-young, a four-term lawmaker, is South Korean President Moon Jae-in’s latest choice to manage the unification portfolio. Like many of his predecessors, the youthful 56-year-old floor leader of the Democratic Party of Korea is coming into the job with vigor and determination. Ideally, the objective of the Unification Ministry is to make peace with North Korea. Realistically, however, the ministry is responsible for ensuring that relations are salvaged and war is minimized. The trouble, as always, is that establishing sustainable inter-Korean harmony is not exactly an easy thing to accomplish—if it was easy, it would have already happened.

If inter-Korean relations can often look like a never-ending rollercoaster, Lee comes into the ministry at a time when the ride is dangerously close to crashing. Notwithstanding Moon’s endless pool of optimism about what the two Koreas could achieve together if both showed some courage and political will, an inter-Korean relationship that seemed so promising in 2018 is now stuck in quicksand. North Korean leader Kim Jong-un’s decision to suspend active military measures against the South is the only bright spot this year. Everything else has been utterly depressing, with communications cut, the inter-Korean office reduced to timbers and nasty words volleyed from the North Koreans. Meanwhile, threats of further escalation casting a pall over the entire Korean Peninsula. If times looked dark earlier this year, when Moon was begging for a resumption of dialogue, the picture today is as black as night.

Enter Lee In-young, who heads into the unification ministry with this sad scene as the backdrop. Lee likely realizes that the environment he is operating in is not conducive to grand agreements. Another inter-Korean summit being scheduled this year is about as likely as the coronavirus magically disappearing. Kim Jong-un has largely written Seoul off as a meddling bystander with no power and no dignity (Kim didn’t mention South Korea at all during last December’s, end-of-year Plenary meeting). Pyongyang has rejected every single proposal from the Moon administration this year. Kim even turned down an idea pitched by Lee’s predecessor regarding the establishment of a joint North-South public health response system, where scientists and public health officials from both Koreas could collaborate on research and share best practices. There’s not much Seoul can do if the other party refuses to dance.

Lee, however, is bringing some ideas with him. Rather than the historic summits of yesteryear, Lee is aiming small. “I hope to seek small-scale trade (with the North) in humanitarian areas related to eating, suffering and things people want to see before they die,” Lee told reporters a day before his testimony to the parliament. “For example, water from Mount Paekdu and liquor from the Taedong River can be exchanged with our rice and medication through item-to-item trade.” Over time, those small-scale barters will lead the way to bigger and bigger trading relationships and interactions, building up the trust that is required to implement the inter-Korean agreements signed with such fanfare two years ago.

Lee’s initiative seeks to accomplish two things simultaneously. The first: rebuild the goodwill that has been lost with the North. The second: push Moon’s inter-Korean reconciliation process forward without violating the torturous U.S. and U.N. Security Council sanctions regime that prevents bulk cash from crossing the border.

Time will tell whether Lee’s incremental approach will be any more successful than Kim Yeon-chul’s. The North Koreans are desperate for revenue; exports to China, Pyongyang’s largest trading partner by far, is down by over 80% from last year. Yet the question still left outstanding is whether small deals like what Lee is proposing are enticing enough for the Kim dynasty to drop the flame-throwing and return to the table.