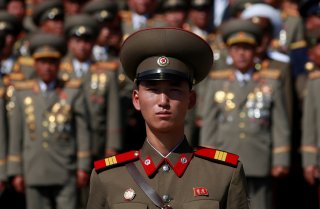 Deputy Secretary of State Wendy Sherman visited the People’s Republic of China (PRC) hoping to ease tensions. Her trip appeared to be a grand flop. At least, Beijing officials were anything but conciliatory in public. But why would anyone imagine a nationalistic rising power would respond well to someone whose government publicly announced that she was going to discuss Washington’s “serious concerns” with Chinese behavior?

Although the PRC’s response must have been a disappointment, perhaps it helped end the persistent Washington illusion that China’s leadership is disposed to help the U.S. pressure North Korea into denuclearization. During meetings in Seoul before heading to Beijing Sherman opined that “thinking together about bringing the complete denuclearization of the Korean Peninsula is certainly an area for cooperation.” Looking ahead to her PRC swing, she added, “I have no doubt that my conversations in Tianjin in a few days, that we will discuss the Democratic People’s Republic of Korea (DPRK). China certainly has interests and thoughts.”

Certainly, Beijing has “interests and thoughts” regarding the North, and probably expressed them to Sherman. However, those interests and thoughts probably don’t coincide with those of t that Sherman observed: “The Biden administration has described our relationships with China as obviously a complicated one. It has aspects that are competitive, it has aspects where it is challenging and aspects where we can cooperate.” Which is true. Unfortunately, the challenging areas seem to predominate these days. Indeed, the contact is increasingly more confrontational than competitive.

Even in the best of times, Beijing had only limited incentive to threaten Pyongyang with potentially regime-breaking pressure over the nuclear issue. Although Chinese officials traditionally claimed the bilateral relationship was as close as lips and teeth, the two nations’ ties were never particularly friendly. Joseph Stalin’s Soviet Union put Kim Il-sung in power, agreed to back his plan to conquer the South, and effectively dragged the PRC into the war.

When U.S./UN troops were advancing on the Yalu and preparing to end Kim’s rule, Mao decided to directly intervene. China generally and Mao personally—his son is buried in the North—paid a high price but received little thanks from Kim. Relations between the two regimes remained difficult as Pyongyang balanced between its two communist neighbors. Beijing’s attitude was particularly frigid during Kim Jong-un’s early years. Xi Jinping met a half dozen times with South Korea’s Park Geun-hye while backing UN sanctions on the North. Only after President Donald Trump scheduled a summit with Kim did Xi arrange his first meeting with the North Korean leader. Xi feared that the PRC would be left behind if Kim cut a deal with the United States, which he considers to be a more distance—and thus potentially safer—meaningless meddlesome, great power.

The problem is not that China controls the North and wants it to have nukes for use against South Korea and America, as some people have claimed. The DPRK long has demonstrated its independence from Beijing, and possession of nukes reinforces North Korean autonomy generally, including from the PRC. Denuclearization is a Chinese objective. However, it is not Beijing’s only objective.

Equally, if not more important is concern over regional stability. A North Korean collapse, sending millions of refugees northward, sparking a civil war, spewing forth loose nukes, and creating both opportunity and pressure for Korean reunification, would be a disaster for the PRC. (Imagine the impact of a Mexican implosion involving a million-man military with nuclear weapons on America.) Yet Washington’s preferred weapon against the North, economic sanctions, seeks to achieve denuclearization by threatening destabilization.

Another consequence—and threat, from Beijing’s standpoint—would be reunification, which would put a U.S. ally hosting U.S. troops on the Yalu. Indeed, the present state of Washington’s relationship with Beijing highlights this issue. Chinese officials very publicly told Sherman that America cannot halt the PRC’s rise. They perceive the United States mounting a concerted containment campaign and certainly don’t want to give Washington the means to add new military bases for that purpose. Equally important, the DPRK is a divisive issue that disrupts U.S.-South Korean cooperation. Today, anyway, Xi Jinping & Co. are not inclined to help America.

This should prompt Sherman and her colleagues to rethink China’s role and how to address Beijing over the issue. Cooperation typically occurs when both sides believe doing so is in their interest. Washington needs to make that case to the PRC while offering to make policy changes to back up America’s case.

For instance, what would the United States and the Republic of Korea do if North Korea imploded under economic pressure? They could offer to share the economic cost of dealing with refugees. They could indicate that they would not oppose temporary Chinese military intervention to halt factional fighting, prevent mass migration, collect loose nuclear weapons, provide emergency aid, or similar purposes. They could propose joint operations in which Seoul (primarily) and Washington would cooperate with Beijing.

Similarly, the allies should address what a post-DPRK might look like. For instance, the United States could promise that it would not do what China expects and America’s foreign establishment wants, expand Washington’s military presence on the peninsula for use against the PRC. America also could pledge to remove its forces upon unification. Seoul could promise military neutrality. The two could agree to end or revise the mutual defense treaty.

Proposals like these cause near hysteria within Washington’s foreign policy community, which cannot imagine a single square foot—indeed, square inch—of U.S.-controlled earth being abandoned. However, the pronounced and very public expectation that America should dominate everywhere forever contributes to Beijing’s paranoia. Only fools trust Washington with the power to do them ill: just ask Muammar el-Qaddafi or his ghost. Sherman’s unpleasant reception demonstrates how antagonistic China’s attitude toward the United States has become.

Indeed, with “Wolf Warrior” diplomacy ascendent in Beijing, even good faith negotiations over policy towards the North wouldn’t be easy. Presumably for domestic political reasons, nationalism has captured Chinese foreign policy. With the North having made itself more vulnerable to the United States and dependent on the PRC through self-imposed isolation in response to the coronavirus pandemic, Xi has little reason to undermine the China-North Korea relationship. Indeed, at a time of growing confrontation with America, and concern over the possibility of confrontation over Taiwan or other territorial disputes, a nuclear DPRK might become a useful geopolitical card for Beijing to play.

In principle, there is nothing wrong with hoping for Chinese assistance in pressing forward with denuclearization of North Korea. However, the Biden administration should assume China will at most offer rhetoric and likely will continue to counter allied economic pressure by offering aid and easing sanctions enforcement with an eye to ensuring Pyongyang’s survival.

This means the likelihood of successful cooperation is small and Washington should begin contemplating a future in which the DPRK not only survives but expands its nuclear arsenal.  Hoping for the best while planning for the worst is the best philosophy to guide the United States in its relations with the North. There are no easy answers—and perhaps no answers at all involving Beijing.