Could the Military Take Over North Korea if Kim Jong-un Died? 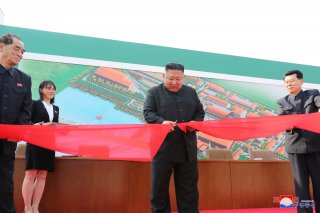 Missing from public view since April 11, Kim Jong-un’s whereabouts and health were the subject of conflicting reports from media and governments, as well as a bevy of sensationalist claims. The fact remains there was no indication of a coup or death, and all three leaders of the DPRK have vanished from time to time, only to reemerge and continue on. Which, of course, Kim Jong-un has now done.

But this National Interest series asks a direct question: what if Kim Jong Un were to die suddenly?

We all know predictions regarding North Korea and its leadership routinely fail. And we all know that there is only a limited number of outcomes for the eventuality of his demise: a successful or botched transition, total collapse, or a civil war.

Kim’s own children are far too young to succeed him, so for the Mt. Paektu Bloodline to continue it would require either his sister, Kim Yo-jong or his uncle, Kim Pyong-il, to follow as supreme leader. Taking into consideration the historic norms of Korea, a female leader (who is even younger than Kim Jong-un) might be tough to accept. Whereas his uncle has been away from the levers of power for decades and has no base of his own from which to draw support. Both would also struggle from the fact that devotion to the cult of Kim declines with each generation.

Regarding peace, any transition of power can derail the process. Kim Il Sung had been working on a possible plan forward with the U.S. and South Korea, but that fell apart after his untimely death in 1994. Détente between the three countries fell apart yet again with an election in the United States and the events of 9/11. And now we have the relationship between Kim Jong-un and President Trump, which is based not on meticulous frameworks, but on their personal relationship with each other.

What has been President Trump’s most important yet intractable foreign policy problem will likely be made impossible should Kim soon die and the world presented with an entirely unknown entity yet again, as Kim Jong-un had been when he came to power in 2011.

From the North Korean point of view, reunification with the South on Seoul’s terms would be unthinkable and something to avoid, so it’s likely they would at least attempt a bloodline succession, even if that person is only a figurehead while the military assumed true power.

While the risk of civil war and aged warlords roaming around isn’t something to dismiss, North Korea’s history of putting down possible insurrections tells us that it is doubtful any single military leader could amass enough authority to launch – let alone win – a civil war.

The fact that the people’s respect for both the dynastic leadership and the military has eroded over time is something often overlooked but will likely play a role in any post-Kim regime. They are now used to getting their daily needs met through market systems and their reliance on the state seems to revolve around the state’s promise (insistence) that it is the only one able to defend them and ensure their survival. If we discount the chances of civil war and doubt the ability of any remaining Kim family member to centralize power, we may be forced to consider a military junta with a Kim as a figurehead.

While respect in institutions isn’t what it used to be, a quarter of the population still belongs to either active, reserve, or paramilitary forces. The military already has control over large swaths of the economy and keeping a Kim at the helm would satisfy decades of indoctrination that flows from the Monolithic Ideology System (which demands absolute obedience to the Kim family).

International cooperation between concerned powers will be required for stability after either a post-Kim Jong-un regime or a post-DPRK eventuality. However, what often gets lost in the punditry is the fact that there are 25 million living, breathing people in North Korea. The ultimate goal of stability in the region can only be accomplished when joined with the stability and wellbeing of those lives.

If the international players focus solely on immediate geopolitical goals with little thought to possible long-term effects, then we risk making another mistake as we did in 1945 with the division of Korea. We risk creating another 75 years of uncertainty.

Jacob Bogle is a US-based North Korea analyst who runs the AccessDPRK blog which uses open-source intelligence to improve the understanding of military, economic, and cultural sites in the country.