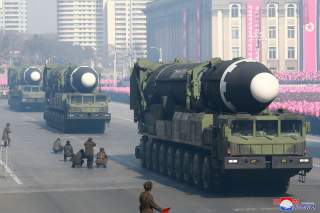 At the end of 2017, the risk of war with North Korea seemed high, as Pyongyang tested an intercontinental ballistic missile that was reportedly capable of hitting all of the United States. In response, Senator Lindsey Graham said, “If nothing changes, Trump is gonna have to use the military option, because time is running out.”

But 2018 began with a series of positive steps towards de-escalation as multiple summits were held between North Korean leader Kim Jong-un and South Korean President Moon Jae-in, followed by a summit with President Trump in April 2018. The year is ending, however, on a sour note which portends a challenging 2019, as new sanctions placed on North Korea by the United States prompted Pyongyang to say the action could “block the path to denuclearisation on the Korean peninsula forever.”

Yet regardless of how volatile interactions with North Korea may be from time to time, deterrence and diplomacy—not preventive strikes or military options— will continue to keep the United States and our allies safe indefinitely. After all, when it comes to the pursuit of peace on the Korean Peninsula, time is on our side.

It has been sixty-five years since the Armistice was signed ending the Korean War, almost a quarter century since the Agreed Framework was originally signed, and seven years since Kim Jong-un came to power. This situation isn’t going to be solved in a matter of months or years.

It is going to require a step-by-step approach founded upon lowering tensions and establishing trust—only then can more substantive measures take place. None of these negotiations are irreversible, and all of them are fragile. Pursuing denuclearization as the must-have outcome, however, sets us up for failure as it is not likely an attainable goal. Stubbornly trying to attain it anyway threatens negotiations towards long-term peace in the region.

It would be great if all parties eventually came to an agreement resulting in the complete, verifiable, and irreversible dismantlement of North Korea’s nuclear capabilities. If there is any real chance for that to happen, however, it would be measured in five or ten-year increments, and only as long as all sides stay focused on reaching a mutually agreeable peace settlement.

America’s main goal should be to prevent war. The only way the United States would ever lose on the Korean Peninsula is if the Trump administration started a war in the misguided belief we can “solve” the matter by use of lethal military power.