Does John Bolton Want a War with North Korea? 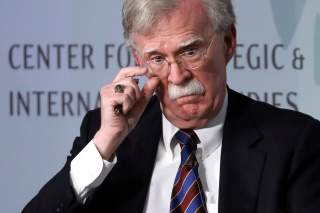 The two could not have been more different in terms of what needed to be done on some of the world’s most significant national security priorities. Bolton was an all-stick, no-carrot kind of man—someone who loathed talking to Washington’s adversaries, let alone striking an agreement with them. Trump was precisely the opposite, a figure steeped in the business world who was more than willing to talk to everybody and anybody, at any time.

Bolton’s abrupt departure was reportedly precooked once Trump decided to extend an invitation to the Taliban for a summit at the Camp David presidential retreat. But in the closing months of his tenure, the long-time Republican foreign policy hawk was seething with rage and disappointment that his boss would dare pursue policies he worked so hard to stifle in the inter-agency. This month, the two finally split up after an unhappy and acrimonious shotgun marriage, with Trump openly expressing his displeasure with his former national security adviser and reminding anybody who would listen that Bolton was one of the architects of America’s worst foreign policy catastrophe—the invasion and occupation of Iraq—since the Vietnam War.

Weeks later, Bolton delivered his first public address since =being ousted from the White House.  While he didn’t mention Trump’s name during the speech, it was abundantly clear who he was talking about. Trump, in Bolton’s telling, made mistake after mistake on the North Korea file, not only trusting Kim Jong-un too much but downplaying the pervasive threat a nuclear North Korea would pose to the world. For those who have followed Bolton throughout his decades in the Washington foreign policy apparatus, none of these remarks are out of character. Indeed, Bolton has a habit of bashing his former bosses immediately after leaving his position in government; back in 2007  after a short stint as U.S. Ambassador to the United Nations, he criticized President George W. Bush’s North Korea policy as dangerously inept and treading down the wrong track.

Unfortunately, Bolton’s ideas on North Korea are as ridiculous and unsubstantiated as they are dangerous. The bespectacled adviser may think he’s the smartest person in the room, but his policy prescriptions are a perfect recipe for an armageddon-like catastrophe on the Korean Peninsula. Here is just a sample of what he suggested today:

Weeks before he was named as Trump’s third national security adviser, Bolton penned an op-ed in the Wall Street Journal in which he made the case for U.S. military action against the North.  He apparently hasn’t graduated from that grade-school thinking of blowing things up first and asking questions later, because he again brought up military force as an option the U.S. government should have a serious conversation about. In Bolton’s telling, "if you believe, and you may not, that it is unacceptable for North Korea to have nuclear weapons, at some point military force has to be an option.”

That military force is still considered to be a legitimate option in the North Korea context is alarming, largely because an air or ground campaign would spur the very use of nuclear weapons Washington is purportedly trying to prevent. There is a reason why nuclear weapons states have stayed away from fighting direct, conventional conflicts with each other; during those hostilities, there will inevitably come a time when one will tap its nuclear arsenal in order to turn the tide of battle or strike pain on its adversary in an attempt to sue for peace. Either scenario would lead to millions of casualties, the likes of which the world hasn’t seen since World War II. Bolton is either woefully misinformed about the history or is so enamored with his own ideology that he can’t see things clearly.

Any nuclear negotiations with North Korea will involve some very difficult give-and-take. For Bolton, concessions are apparently unacceptable. He remains fixated on what has been termed the “Libya model,” a reference to the 2003 agreement with Libya that promised return for the Qaddafi regime’s re-entry into the international community in return for the complete disarmament of its weapons of mass destruction. Less than eight years later, Qaddafi’s regime was a pile of rubble, with Qaddafi himself executed by his enemies after being dragged out of a drainage pipe and sodomized.

Kim Jong-un obviously isn’t interested in the Libya model, and it doesn’t take a doctorate in international relations to explain why. Kim, obsessed first and foremost with his own self-preservation, would be irrational to trade away his nuclear deterrent for a commitment of political and economic normalization at a later date. He would be even crazier to do so today, knowing what happened to Qaddafi a decade and a half earlier. The North Korean position on the Libya model has been consistent: if you insist on it, we have nothing else to talk about.  Bolton, who callously equates diplomacy with appeasement most of the time, knows this.  Indeed, it may be precisely why he is advocating for it so strongly.

Any North Korea analyst worth his or her salt recognizes that you won’t get anywhere with Pyongyang if you insist on the moon, the stars, and everything in between. Diplomacy involves hard choices and even harder concessions. If you aren’t willing to make those choices, then you shouldn’t expect any results.

Bolton has made a career opposing concessions, which means he opposes diplomacy. He didn’t disappoint in his speech. At a time when a growing segment of the North Korea analyst community is embracing a step-by-step formula as a way to kick-off the diplomatic process, Bolton is swatting the approach away like former White House chief of staff Reince Priebus used to swat away flies in the Oval Office.  “Action for action, as the North Koreans call it, is a way to sustain their authoritarian political system, keep their economy going, and yet still have the benefit of the bulk of their ballistic missile and nuclear programs,” Bolton told the CSIS audience.  In other words, action-for-action is merely a ploy by the North Koreans to retain both their system of government and their nuclear weapons.

The former national security adviser may very well be right on this score. But he is wrong to assume that a more methodical, incremental negotiating process won’t succeed in at least chipping away at the North Korea nuclear file. Washington won’t be able to test the proposition as long as it doesn’t try.

And for that, we all should be thankful John Bolton is no longer setting policy in the White House.

Daniel R. DePetris is a columnist for the Washington Examiner and a regular contributor to the National Interest.